Pupil Simon Canniffe is among those toasting success, as his clean sweep of top grades will see him become a student at Cambridge 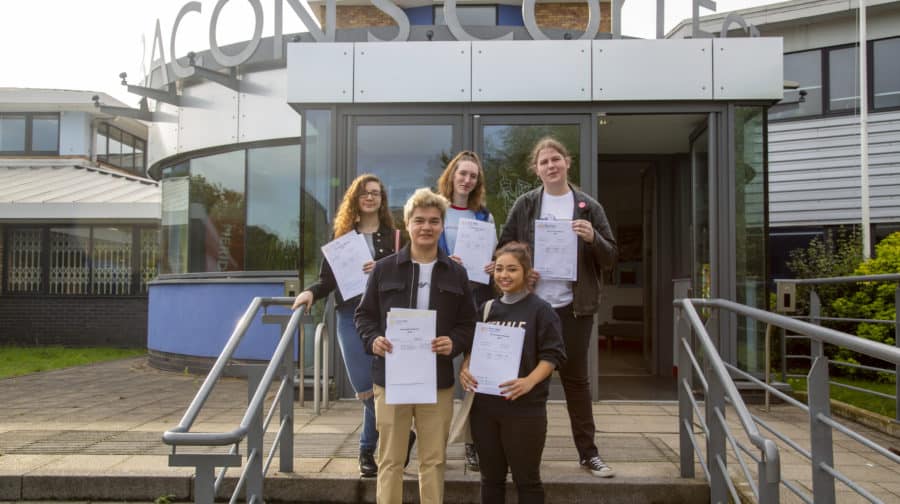 Students at Rotherhithe’s Bacon’s College have been celebrating today after a ‘strong’ set of results saw pupils get places to top universities and places on competitive apprenticeships.

Just under three-quarters of all A-Level entries at the College secured an A*-C grade (72 per cent) with 45 per cent of all entries securing A*-B grades.

The College also hailed a ‘very strong’ set of results in vocational A-Level equivalent qualifications, reporting that 92 per cent of all grades achieved either a Distinction or Distinction*.

Among students celebrating at the Timber Pond Road institution are Simon Canniffe, whose three A* star grades in Chemistry, Mathematics, and Physics, earned him a spot at Cambridge to study Chemical Engineering.

Pupil Arjun Patel will begin studying at Russell Group university, Liverpool, after securing grades A, B, B, while classmate Mohammed Rahman’s grades of A, A, B in Chemistry, Maths and Biology has earned him a coveted place at King’s College London. Among those toasting their success are Simon, whose 3 A*s will see him take up a place at Cambridge (pictured left, with VP Christopher Hall)

Alessandro Canonico was among the students achieving vocational success alongside his A Levels, as his CTec Media (Double Distinction) has secured him a course-place to study visual effects.

Fellow student Miryam Greco will be heading straight for the world-of-work after her  CTec Media (Double Distinction) alongside top Spanish and Italian grades landed her a job as a school languages assistant.

Principal of Bacon’s College, James Wilson, congratulated students on their successes, saying it was ‘particularly pleasing’ to see as a headteacher.

“Many staff at the College have worked with these students since they joined us in Year 7 and so it is a pleasure for them to see how these young people have matured and grown in their confidence and ambition during their time here,” he said.

Throughout this time the staff have helped so much to shape me into a young man ready for the world of law.”