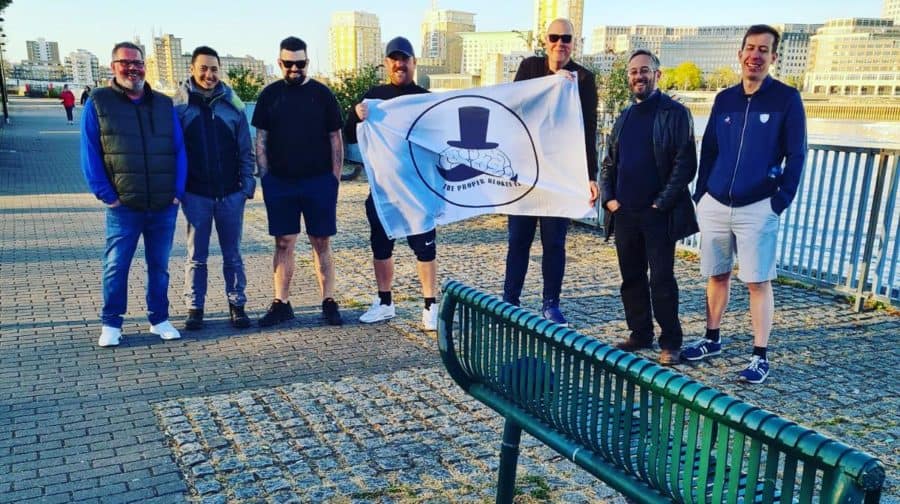 Supporters of a Bermondsey men’s mental health charity have walked a half-marathon along the Thames to raise money for the UK’s lifeboat workers.

“We just thought, although we might not raise a massive amount of money, if it means those guys have a bit of a nice office or whatever it’s the least they deserve,” Johnson said.

He said he chose the RNLI because of the tragic work they often perform. “It’s close to a lot of our hearts,” he added.

The fundraiser took in £219 at the time of publication – well over the original £100 target.

“Bermondsey born-and-bred” Johnson, who said he still works as a community coach for Millwall, set up the Proper Blokes Club in the first lockdown.

“Walking was such a massive outlet for me when we went into lockdown, and it works for the majority of people rather than a ten kilometre run or a weights session. [By focusing on walking] you automatically open up to loads of people.

“When I first put it out there, I thought ‘If it helps one lad out then happy days. I turned up and there was one lad turned up – but it was great because we spent eight hours together. The next week we had two more and it just grew and grew from there.

“Now we’ve got a solid group of lads. And there are a lot of people that connect through social media that aren’t from the area,

The Proper Blokes Club meets every Thursday at 6pm and Sunday at 6.30pm by HMS Belfast. They walk through the docklands area of Bermondsey and Rotherhithe, ending up at Surrey Quay station or near Stave Hill Ecology Park.

Donate to the fundraiser here: www.justgiving.com/fundraising/scott-johnson38?newPage=True&fbclid=IwAR3QY7A10uqjyNy3d20M1ABN0RvlZXpeVtOtwZGF_32rgYLoi1J8IImzI6A