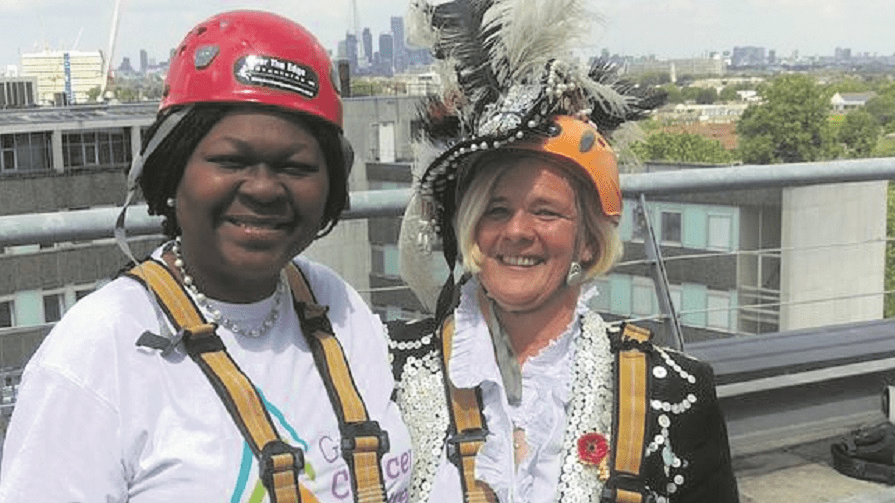 The Mayor of Southwark said that her recent hair-raising charity stunt, in which she abseiled down the side of King’s College Hospital, was “just the start” of her year of fundraising.

After braving the 100-foot descent with Michelle Thorpe, the Pearly Queen of Rotherhithe, Dora Dixon-Fyle said she was looking “onwards and upwards” for more ways to raise money for Guy’s and St Thomas’ cancer centre.

She told the News: “Looking back, I’m really pleased. I feel really courageous and that I can do anything. However, on the day itself I was a bit shocked because it was even higher than we expected! It was hard but I could hear people on the ground chanting in support, so I managed to do it.”

The recently-appointed Mayor is already planning her next heart-racing fundraiser, a sponsored window-cleaning jaunt up the Shard.

She said: “The response has been great, with even Millwall getting in touch to say I was a ‘lioness’, which was a first! It was definitely worth it, and this is just the start.

“I’m looking onwards and upwards now, and I will be challenging myself with scary stunts and challenging people to donate to a great cause.”

Michelle Thorpe, who abseiled down the building in her full Pearly Queen outfit, said the abseil was “brilliant, absolutely brilliant.”

She said: “I’ve done this before so I had to coach Dora down a bit, but hats off to her, she did it and we raised a lot of money.

“I’m the only person to ever abseil in a pearly suit! I was going to wear a skirt but it wasn’t a good idea, so I wore bloomers instead. All of the old girls watching were laughing, it was quite funny.

“I’d like to say thank you to everyone who sponsored us and to please keep giving generously.”