'It's a gorgeous thing to do for a stranger in need' 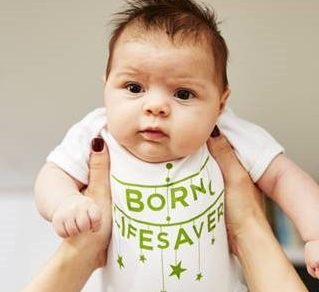 On March 12, blood cancer charity Anthony Nolan celebrated its 50,000th donation of blood cord donated by new mums since the programme began in 2008.

Umbilical cord blood can play a vital role in helping patients with blood cancer or blood disorders who are urgently in need of a stem cell transplant but – as yet – have not found a match on the Anthony Nolan register.

Cord blood is rich in stem cells, immediately available, and does not need to be an exact match for patients.

This is especially important for patients from minority ethnic backgrounds who are less likely to find a match.

The Croydon-born actor, who played Carly Wicks on the BBC soap, explained: “It didn’t hurt me or my babies and otherwise would have been chucked away.

“Cord blood is collected and goes to someone who is fighting blood cancer – where it can literally give someone a second chance of life.

“Our babies became life-savers at birth.

“I recommend any mothers-to-be to look into doing the same.

“It’s a gorgeous thing to do for a stranger in need.”

Around 2,000 people in the UK need a stem cell transplant from a stranger every year, with blood cancer accounting for nine per cent of all new cases of cancer diagnosed in the UK.

Linda Moss, a clinical midwife adviser at the charity, says: “Blood cancers such as leukaemia and lymphoma and blood disorders such as aplastic anaemia stop the immune system working properly.

“If a patient has a condition that affects their bone marrow or blood, then a stem cell transplant may be their best chance of survival.

“Doctors will give new, healthy stem cells to the patient via their bloodstream, where they begin to grow and create healthy red blood cells, white blood cells and platelets.

“That means a cord blood match is often their own chance of survival as umbilical cord blood is rich in stem cells which can be used in transplants.

“By donating their cord, women in those areas can help save lives,” Ms Moss added.

To find out more about Anthony Nolan, and to join its register, visit: www.anthonynolan.org