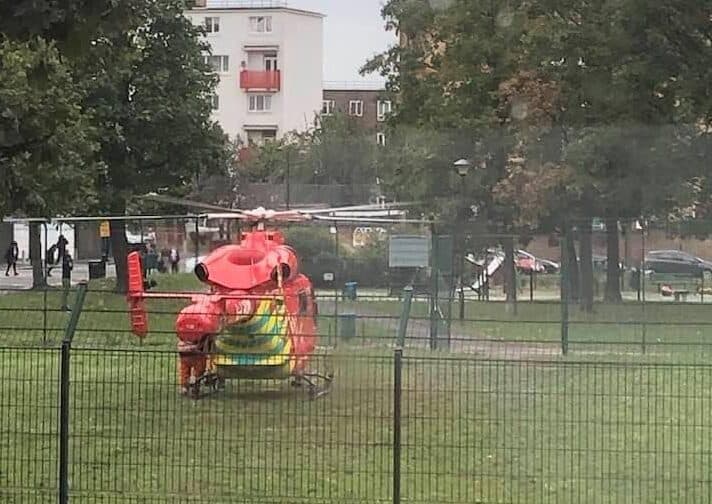 The air ambulance landed on the green near Lucey Way, SE16

A man is seriously injured after a shooting near a Bermondsey primary school this afternoon, just as children were due to finish lessons.

The emergency services were called to the scene near St James’ Primary School at around 3.30pm.

A man, aged 27, has been rushed to hospital, and is suffering from “life-changing” or “life-threatening injuries.”

A cordon remains in place. A police spokesperson told the News: “Police were called at 15:24hrs to Alexis Street, near St James’ Primary School, SE16, following reports gunshots were heard.

“Officers attended, along with London Ambulance Service [LAS], and found a man, aged 27, with a gunshot wound.

“He was taken to hospital and his injuries are being treated as life-threatening/changing at this time. Nobody else was injured.

“A cordon remains in place at the scene.

“No arrests; enquiries into the circumstances continue.”

The London Air Ambulance was called to the shooting, and was forced to land in nearby Lucey Way.

A spokesperson for the air ambulance said: “Our advanced trauma team was dispatched via aircraft by London Ambulance Service at 15.31 today to reports of a shooting in the Southwark Park Road area.

“After treatment on scene the patient was transferred by land to a major trauma hospital accompanied by London’s Air Ambulance.”