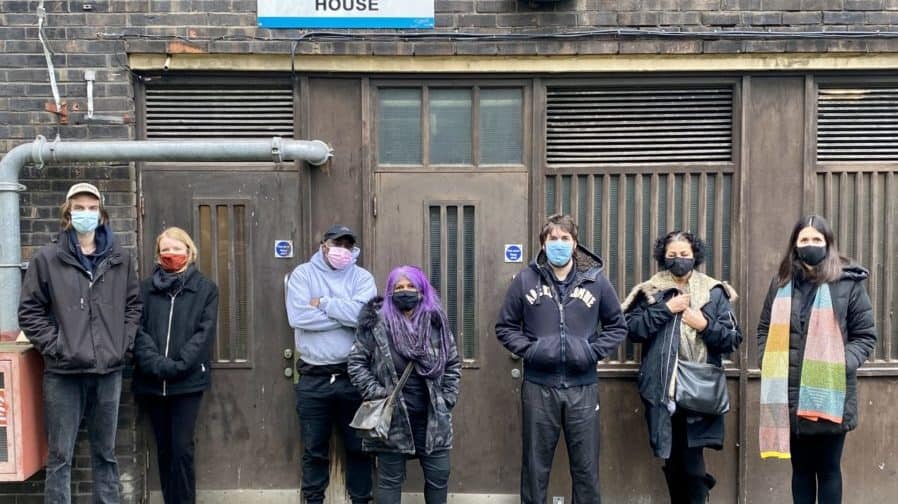 Leaseholders in Albert Barnes House say they have been ‘treated with disdain’ by Southwark Council after challenging bills of up to £24,000 for a new heating system they say is still not up to scratch.

Six homeowners from the New Kent Road block are disputing the cost for work they never wanted in the first place and say is inadequate.  Their bills range from £19-24,000 for work across the eighteen storey block.

One couple particularly devastated by the dispute, and left in a financially precarious position, say they had no choice but to agree a four-year payment plan with the council.

Jérémie and Barbara bought their one-bed flat in 2017. Barbara, aged 34, who is now pregnant, says the only change they have seen inside their home since the hugely disruptive district heating overhaul began last year are the additions of three new radiators and a thermostat that hovers at around fifteen degrees – even during the coldest weeks of the year.

She said that independent surveys and quotes came up considerably cheaper than the work that eventually went ahead – leading to an ongoing dispute between the council and a group of six leaseholders who found themselves handed the huge bill.

“They replaced the entire system and a lot of equipment that still had life left,” Barbara claims, highlighting reports from independent surveyors and contractors who said improvements to get the system up to scratch could have been done for much less.

“We know that some people had outages but we’ve lived here three years and didn’t have problems.

“The overall failing is that we just don’t feel that there has been an upgrade.”

The disruptive work took place during the pandemic both inside the communal boiler room and individual flats within the block of 99 homes – all while residents were working from home.

“It was difficult keeping it aired, workers weren’t wearing masks and it was impossible to social distance,” she says.

“Our flat is tiny. I was trying to stay in one corner of our flat all day,”

The couple are both self employed and now struggling to pay their monthly outgoings.

They are among hundreds of people to buy ex-council properties who find themselves liable for huge bills covering estate-wide improvements.

As this paper has reported before, council leaseholders are in a particularly difficult position when financial planning because local authorities can only charge for work that takes place – and not build up sinking funds. But major works programmes are on a rolling basis and often unpredictable.

“When we bought we knew leasehold was the only option as first time buyers,” Barbara says. “We knew we would have to pay service charges and for some works, maybe, but we had surveys done that didn’t show any problems.

“We barely had any notice of major works from the council, they only plan ahead a year or so at a time.

“We have no other choice but to pay it, but we’re in debt and can barely make the payments.

“I would be happy to pay for something if it was truly necessary but this system is overspecified, overpriced and we are trapped. We are literally living day to day.

“It just feels like they have shown no regard for the COVID-19 situation.”

Their worst nightmare is losing their home or having to sell up, knowing renting again would be extortionate.

Taking on the council and challenging the bill in court also comes at a cost, emotionally and financially.

In response to an enquiry from the News, a council spokesperson said: “We have been in discussion with residents of Albert Barnes on this matter for some time, and I am sorry that they still do not feel we have reached a satisfactory conclusion – we hope to continue that dialogue until we can resolve this.

“The district heating system did need an upgrade to fix the heating problems the residents had, but this does come at a cost to leaseholders.”

This upgrade has been particularly problematic given the poor planning and flawed feasibility survey that were sub contracted out to third party contractors.

The Council allow contractors to sub contract works thus allowing numerous companies to cream off profit and allow sub standard work to be provided to tenants and leaseholders.

Leaseholders are treated as cash cows to pay for unnecessary works, keeping Council Officers in jobs.