Albins ‘overwhelmed’ by messages of support 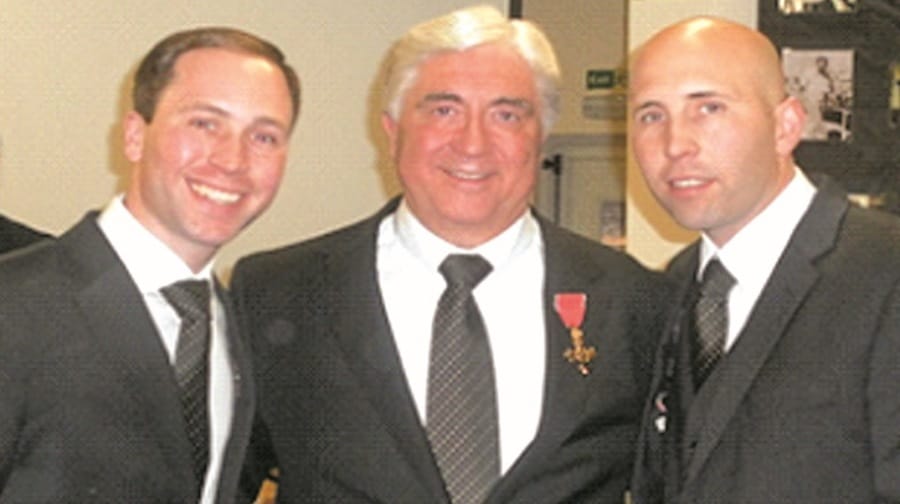 A family of funeral directors has been “overwhelmed” by the messages of love and support which have flooded in after news that Bermondsey figurehead Barry Albin-Dyer, who has been battling cancer for well over a year, is sadly no longer able to receive any further treatment.

In a post on the family-run funeral directors’ website Barry’s sons, Simon and Jon said they were reluctantly announcing that their father’s condition had deteriorated. He came home from hospital two weeks ago, where he is now being made comfortable and free from pain.

Since the statement went online, Simon and Jon say the phone hasn’t stopped ringing. “We just want to thank everyone for their kind wishes of support at this time,” they told the News. “Barry is still fighting and he’s comfortable,” they added. The two sons, who followed in their father’s footsteps into the family business of bringing comfort to the grieving in their time of need,  paid tribute to the brave and stoical way Barry continues to fight his illness.

“He has faced his illness at every stage with courage and with all his will, and we can assure you that continues,” they said, adding that the support of the community, friends and family has been a great help.

“From the very beginning you have been behind him and we remind him every day of your well wishes, thoughts and prayers. After all there is nothing more powerful,” they said.

“It will be no surprise to you to know that his immediate concerns are not for himself, but as ever are for his family’s wellbeing, the business and that people are being cared for the way he has taught us all – the Albins way, his way,” they continued. “Thank you with all our hearts for your continued love and support.”

The former MP for Old Southwark and Bermondsey, Simon Hughes, a close friend of Barry for over 30 years, visited him earlier this week and said he was ‘on good form’.

He said:?“We just have to hope and pray that the days ahead will be peaceful and painless. In the meantime everybody will go on looking after him and giving him the care he deserves.”

Southwark council leader Peter John urged Barry to “keep fighting” in a message to the News. “For so many of us he represents the best of the Bermondsey spirit and he’s shown that amazingly during his illness,” he said. “As he has been someone who has offered comfort and support to so many in difficult times I want him and his family to know that Bermondsey is there for him and them now.”

Facebook was flooded with hundreds of messages of support for the well-loved pillar of the community with many changing their status to a photo of a candle with the message ‘this candle burns for Barry Albin’ in solidarity with the family.

Sandra Connell: “Very sad news. I was a young woman when we lost our mum suddenly, your dad was a great comfort to us all and you have laid to rest for members of my family. I pray for you all. God Bless to you all.”

Kelly Way: “It is very sad indeed and our prayers are with you. Barry has done many a family funeral for us over the years including my own mother who with Barry ‘s dedication to detail had a wonderful send off in 2004. He is a lovely man indeed. Love to you all at this time.”

Linda Mick Odonnell: “This is to say that Barry Albin is one of the most respectable and nicest gentlemen one could meet in your time of need. When my mother-in-law and father-in-law passed away it was a pleasure to let him perform their funerals- both done with great professionalism from both him and his staff. God bless Barry.”

Sons eh, they rock our world and are our rocks when we need them most XX

I have known Barry since a very young age and used to go to the same school Bacons.
He is an inspiration a true Bermondsey figure one I would say will be talked about for many of years to come. I have seen him at all my families funerals and he is always very polite and dedicated to his job and the people of Bermondsey. I am sorry to hear that he is very ill. I wish him big hugs and god bless him for all his commitment to our families of Bermondsey.
Love Elaine Pooke

It is sad that Barry is so ill .He has been caring and understanding with all of my family’s funerals a true professional. Keep fighting.
Rgds
The Heasman Family.

R.I.P Barry Albin Dyer I had the pleasure of meeting you at very sad occasions, but you was always there when people needed you. My thoughts are with your family as they have lost a true gentleman. GOD BLESS.XXXX

I have had the privilege of knowing Barry for almost 20 years and working with his Company. A man of great honour and dedication to all those he served and he will be greatly missed. R.I.P.

I worked with Barry when I was director of The Evelina Children’s Hospital Appeal and we were raising £12 million to equip the new hospital on the St. Thomas’ site. He was always a wonderful friend.