'To know that my son was a good person, that he touched so many people’s lives, and was so kind, it is the only thing I have that can help me heal' 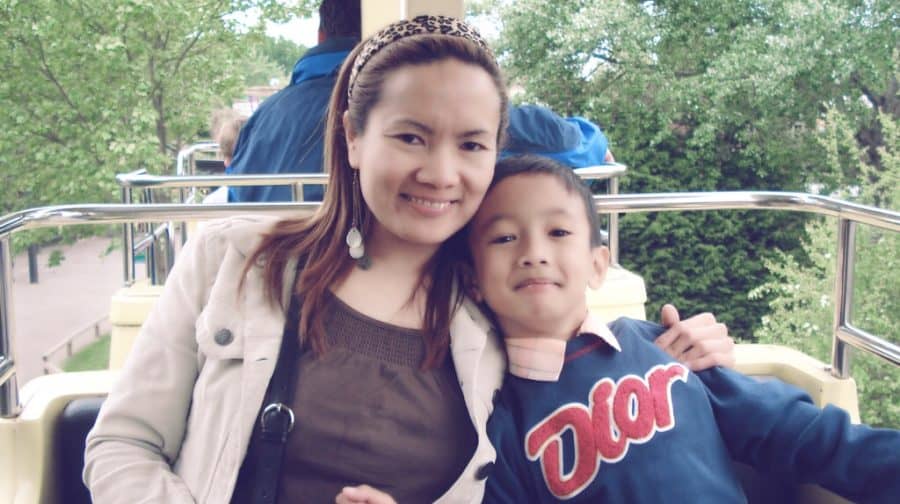 Grace with Aldrin as a child

The devastated mother of a nineteen-year-old artist who was found dead last week has told of her heartbreak at losing the son she worked so hard to lift from poverty and give a better life in London.

Forty-four-year-old nurse Grace Carlos discovered her only son, Aldrin Lloyd, had been found dead last Wednesday, nearly three weeks after he disappeared from the home they shared on Canada Water’s Plover Way.

When he first vanished she never imagined he would have left of his own accord, or wanted to hurt himself.

“He had future plans, he wanted to learn how to drive and he recently told me his dream was to be a father,” she told the News.

Grace says she and Aldrin were very close, partly because they were making up for lost time. In February 2002, when Aldrin was two years old, she left him in the care of her mother and siblings in Cabanatuan City in the Philippines, and came to London in search of work.

A trained nurse, who was 24 when Aldrin was born and separated from his father, she made the heart-breaking decision to move to London without him so she could give her family money to eat.

“People from here can never imagine what the poverty there is really like,” she told the News. “I was the eldest of four children, and at ten-years-old I was looking after my siblings.

“I had to go to the market, clean the house and do the washing, and get my siblings ready for school.

“We would have just one meal to eat, to share between all of us. We were hungry.

“It is not the life that I wanted for my son. I said to him: ‘you will never get hand-me-down clothes’, because that’s all I had.

“I did not experience the ‘normal’ childhood. It was a childhood of poverty. But this is not just my story, it is the story of many Filipinos.

“We live in a third world country and we have to leave our families to find work.

“There was no Whatsapp back then. I relied on a £20 calling card and visited for holidays. I used to call my mother just to hear him say ‘mama, mama, mama’ down the phone.”

Grace worked all hours she could including, night shifts, overtime and during the holidays to save up enough money to help her family, pay for Aldrin’s education, food and clothes, and get a home in London he could one day live in.

Over the next eight years she saw Aldrin only a few times a year, when she was able to take afford flights to go to his school recognition days and graduation, and spend her time off work taking him on holiday.

The young Aldrin was already showing signs of talent. “As soon as he could hold a pencil he was interested in art,” she says. “Our house in the Philippines was full of his sketches, I had to keep sending money to keep repainting the walls.”

When Aldrin was twelve, mother and son were finally reunited when he permanently moved to the UK, gaining a place at Westminster City School, and slowly adjusted to his new life in Southwark.

“Both of us were really excited to be together after a long time,” says Grace, “I promised to him that I would show him the world.”

The young Aldrin loved basketball and collecting basketball shoes, and took up the sport as well as martial arts, and gradually settled into school making friends.

“He was sensitive, he liked quiet places, and was so kind and thoughtful,” she says. Self portrait, by Aldrin Carlos

One former classmate has written to Grace, telling her how every single day Aldrin shared his packed lunch with him when he ‘didn’t have a pound to his name’.

But the death of his father from cancer, who had been living in the Philippines, and Grace’s own breast cancer diagnosis just two years after he joined her, left both of them reeling.

Seeing his mother overhaul her diet and lifestyle, he too decided to go vegan and ditch tea and coffee, while she underwent radiotherapy treatment. From then on he became more interested in Buddhism, martial arts, and meditation.

“I said to him, ‘because you are only fourteen-years-old I have to fight this’. And he said to me, ‘mama I am going to look after you’. He was my strength, my constant reassurance.”

Wanting to make the most of the time they had together, Grace began using her holidays and Aldrin’s time off school to go travelling to as many places as they could, visiting San Diego, Dubai, Japan and all over Europe.

Fortunately the treatment worked and she went into remission, believing they had many more adventures yet to come.

After gaining a bursary to study Fine Art at City and Guilds, it looked like Aldrin was on the way to fulfilling his dreams.

His tutor, Robin Mason, described him as “a wise, skilful, talented, creative whirlwind with a soul that was far older than his tender years.

“Alongside his insatiable hunger to learn, his generosity and ability to help support and inspire others was unfathomable.” Another staff member, who managed the school’s bursary scheme, recalled him giving her a card to say thank you, and how he was unique among the students in inviting her to his art presentations.

“I was always very touched by his caring way,” she said.

“When I saw him around the school he greeted me with a hello and a big smile. I will never forget this special person.”

Tributes from fellow students described him as “an amazing artist and friend” who “raised the bar for quality and quantity of work”, “a kind, intelligent and warm soul”, “a source of pure inspiration” who “exuded passion in everything he did”.

His martial arts teacher, Isaac, wrote: “You are more than a student. You are my best friend, my little brother and have been my greatest inspiration in being a better martial artist and example.”

And, even after his death, he is still inspiring others. Incredibly, it was someone who had never met Aldrin or Grace who set up a GoFundMe page to help pay for his funeral and support Grace.

An artist, who is half Filipino, was so moved by Grace’s appeal that he set up the page with fellow members of a dog walking group who regularly visit Russia Dock Woodland, where Aldrin’s body was found, indicative of the compassion from the local community, many of whom often saw Aldrin practising his martial arts moves in the park.

Grace says the kind words and stories about all the good Aldrin did in his short life are the only thing helping her to get through each day.

“Did I work too much and miss something important?

“What could I have done? I keep blaming myself and don’t know how I can go on.

“To know that my son was a good person, that he touched so many people’s lives, and was so kind, it is the only thing I have that can help me heal.

“I have been so touched by everyone’s kindness and generosity.”

READ MORE: Questions remain unanswered as to why it took 17 days to find Aldrin Carlos’ body less than a mile from his home