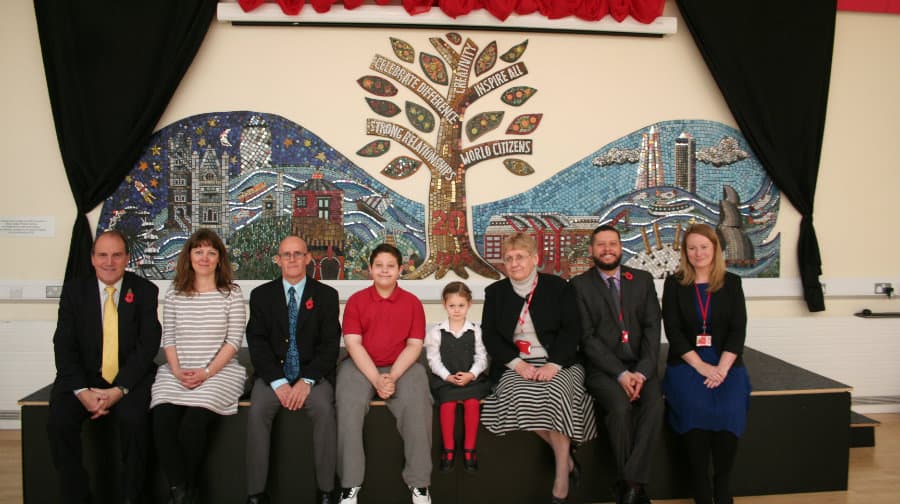 Pupils, staff and governors at Alfred Salter Primary School celebrated the 20th anniversary of its founding by unveiling a special mosaic last week.

The Rotherhithe school was officially opened in 1995, with over 1500 boys and girls passing through its doors since then.

The mosaic, designed in sections over the last month by pupils and teachers, features Southwark landmarks including the Shard, Tower Bridge – and, of course, the school itself.

The mosaic was unveiled by former MP for Bermondsey and Old Southwark Simon Hughes – with the help of the youngest and oldest two pupils in the school, Melba Summer Lara and Tommy Mole respectively.

Speaking to the entire student body after the unveiling, Sir Simon compared the pupils in the school to the tiles that made up the beautiful mosaic.

Sir Simon was present at the opening of the school two decades ago, as was Stuart Hayter, who has been head teacher throughout the school’s existence.

He said: “It’s been an amazing opportunity to start a school from nothing and watch it grow. I never imagined that I’d stay here for 20 years. It’s a very successful school and I think we’ve maintained the ethos which is represented on the mosaic.”

Sir Simon talks to pupils at the unveiling.