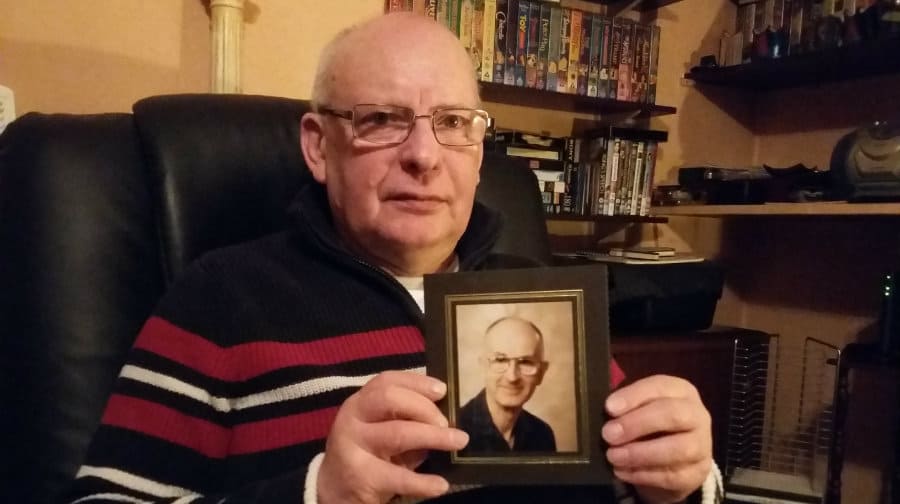 An elderly man who suffered from Alzheimer’s has been paid a loving tribute by the long-term lover and companion, who has died only weeks after their wedding was put on hold.

David Newman, 80, died on Saturday at the Tower Bridge Care Home following a urinary infection and a damaged bowel, but had also suffered from Parkinson’s disease.

Mr Newman was visited at the care home ever day by Keith Buxton, 69, who had lived together in Jamaica Road, Bermondsey, since 1988.

Keith had proposed to Mr Newman on Valentine’s Day, and had almost married on Tuesday, February 23 in Mr Newman’s room at the care home. Mr Newman had been in better health that day. “He was speaking in full sentences and seeming well,” Keith says.

“I told the registrar David was doing well, so the registrar said ‘right let’s do it’, and dropped everything to come and marry us.

“The staff at the care home got him fresh clothes and shaved him especially to make him look nice.

“We were all in his room, then half way through the ceremony we heard a knock on the door.”

David Newman, who died of a urinary infection two weeks after his wedding was called off due to his Alzheimer’s

The ceremony was interrupted by the care home’s managerial staff, who insisted the wedding be put on hold until they could say for certain Mr Newman was “aware of what he was agreeing to”.

“They said David first needed to be checked by social services, but they couldn’t come until the next day. By then David’s condition had again taken a turn for the worse again, and his speech was very limited.” Tragically, the wedding had to be called off and his condition continued to deteriorate.

“David had proposed to me in 2013, just after gay marriage became legal,” Keith said. “But I told him I didn’t see the point.

“When I proposed to him on Valentine’s Day his face lit up and he cried. I just wish I had realised it had been so important to him all along. I feel like I have been so selfish.

“I know he really did want to marry me. He just never mentioned it again because he was content with what I wanted.”

Keith says he Mr Newman met in 1984, after his old boyfriend died of cancer at about the same time Mr Newman also lost his wife to the disease.

Mr Newman was born in Huddersfield and served in the RAF after World War Two, later becoming a Salvation Army captain. Keith was raised in Doncaster and moved to London for work, later convincing David to follow after being made redundant from his old factory job.

David Newman at his old home in Jamaica Road

The couple enjoyed going to their favourite haunts, the Tower Bridge Road Whetherspoons and the Chelsea Kitchen in west London, which they often visited after a trip to see Chicago or Star Light Express at the theatre.

Mr Newman was a “gentle soul” who would go to the shop across the road and bring back copies of the Metro to put through everyone’s front door in their block of flats. Keith said he would like to scatter Mr Newsman’s ashes in Southwark Park where he loved to feed birds and squirrels during summer.

Mr Newman died having had no children, and with no living siblings.

His funeral will be held on Wednesday March 23, at 10.45am at Honour Oak Cemetery. His body will be taken to the funeral service from their Jamaica Road flat in Wickfield House at 10.15am “for anyone who wants to say goodbye to him there”.

It says early in the post “Mr Newman was visited at the care home ever day by Keith Buxton, 69, who had lived together in Jamaica Road, Bermondsey, since 1988”

But then says “Keith says he Mr Newman met in 1994, after his old boyfriend died of cancer at about the same time Mr Newman also lost his wife to the disease”

Sorry to say but this doesn’t add up

Thanks Lee, the copy has been amended to say they met in 1984, as was intended. Kind regards.