The 'incredibly irresponsible' products are designed for use on a balcony, and the fire brigade wants them removed from sale 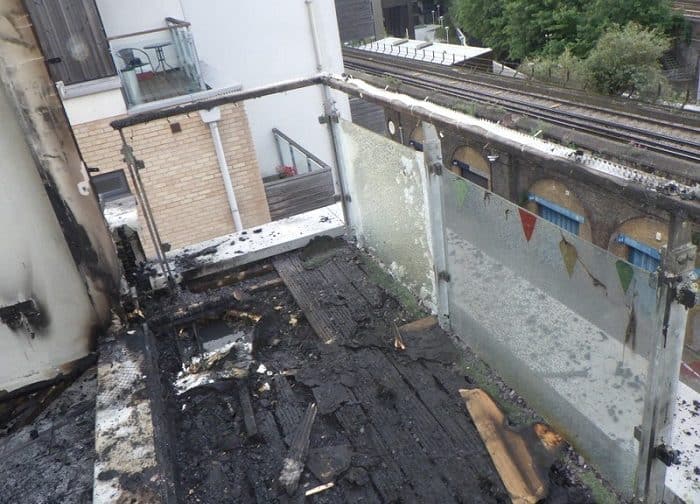 Amazon has removed balcony BBQs from sale after a devastating fire in a block of flats in Deptford which left residents homeless.

The products are designed to be used on balconies, despite warnings from fire chiefs that they are highly irresponsible.

The fire on Deptford’s Childers Street in May, was caused by a BBQ being disposed of in a plastic bag on a balcony. 100 people were evacuated.

Now retailers Amazon and Menkind have removed the products from sale and offered customers a refund after being contacted by the London Fire Brigade.

The Brigade’s deputy commissioner, Richard Mills, urged anyone who has bought a balcony BBQ to raise their concerns with retailers, and not to ignore warnings about their use. No-one was injured in the fire in May

“Products designed specifically for people to barbecue on their balconies are incredibly irresponsible, and we are now asking customers to take action immediately and not to ignore the warning,” he said.

“The fact these companies took such swift action to take these products off the shelves shows what a very real risk they are.”

But other retailers ignored a letter sent to them by firefighters, said Mr Mills – and are still selling the products.

“However, we remain deeply concerned that other companies did not respond to my letter and that these products may still be available for sale and customers are unaware of the dangers of using them.” Residents were left homeless after the blaze

London firefighters have attended more than 600 balcony fires in three years, he added.

A spokesperson for Amazon said it was committed to working closely with the authorities to remove products which risk a fire from sale.

“As soon as the London Fire Brigade raised concerns and new evidence about these particular products we took quick action, removed them from sale and contacted customers,” said the retail giant.

“We value the expertise of the London Fire Brigade and are committed to working closely with them and other relevant authorities on these matters.”

If you put something hot in a plastic bag, what do you expect? Reminds one of the American expression – guns don’t kill people – people kill people. Like most things, they are probably safe if used and disposed of properly. I have not seen one so I’m not 100% sure. I not longer live in London but on the coast. Lower rent, lower prices (not on everything) but lower wages and fewer jobs. (I’m just outside Hastings). At least I have aa small garden where I could have a proper BBQ, should I so desire one. It’s also not OTT with its PC.

A very timely reminder. The balcony season is under way, and city people in general are less afraid of fire than they are of butterflies and flowering plants. They are also not very competent at maintaining fires safely.
The more Health & Safety Gone Mad the better.
Grenfell Tower started with people sneering at regulations.