New park pathway is on site of 'Vicar's Oak' 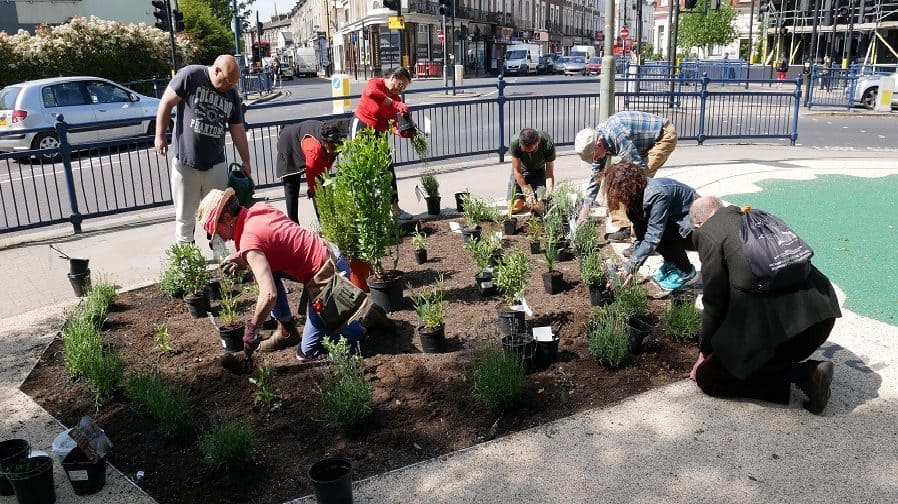 Project volunteers planting close to the site of the Vicar's oak

A new footpath and flower bed has been created on the historic site of Vicar’s Oak, where the four boroughs of Bromley, Croydon, Lambeth and Southwark meet.

Last week’s history feature traced the real and mythological history of the Great North Wood, including the use of ancient oaks throughout the centuries as boundary markers such as the Vicar’s Oak, near today’s Crystal Palace Park.

The tree once sat where the parishes of Bromley, Camberwell, Croydon and Battersea – which used to include Penge until 1888 – but today is a traffic island, though still marks the point where four modern-day boroughs cross.

To celebrate the unassuming spot’s rich heritage, a Heritage Lottery funded project has now seen volunteers work with a landscape designer to create a new path into Crystal Palace Park, with funding from Bromley Council and local business Eastern Cuisine.

As well as ceramic lettering and flowers, there is also a tree stump from Dulwich Woods, one of the existing fragments left of the Great North Wood, worked into the design.

Project coordinator Sue Giovanni said: “Volunteers have worked hard to create an accessible and attractive new entrance for the park and have been pleased with the interest and positive comments from passers-by. The Vicar’s Oak Path provides a focal point for the area and is already being used as a meeting place for local people, as well as for the boroughs.”

A volunteer added: “The whole project opens your eyes up to what’s going on in the community. It is not something that just stops now the project’s finished; it just goes on.”

The new path is one part of the wider Boundaries project, focusing on oral histories, research, talks, walks and performance events all about Crystal Palace’s boundary history.

The new heritage path will be officially opened by the Deputy Mayor of Bromley, councillor David Cartwright on Saturday, June 9, with music played by children and young people from Panash Steel Orchestra.