Residents were concerned the acid could be used in an attack 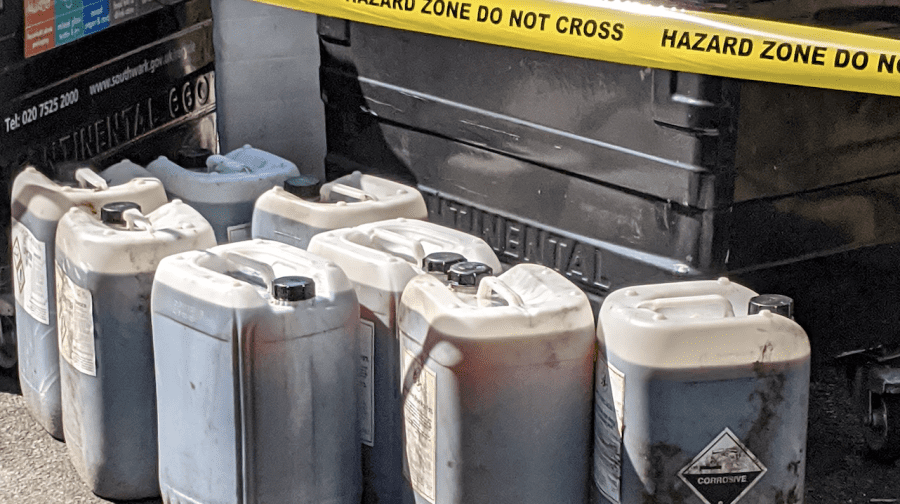 Residents have spoken out after a large quantity of dangerous acid was left lying around on a Camberwell estate for several days, writes Kit Heren…

People living in Barnwell House called housing association Peabody last Thursday after spotting tens of gallons of hydrochloric acid left by the recycling bins near the entrance to several flats.

But despite concerns that the acid could fall into the wrong hands or be spilled, releasing toxic fumes into the air, the harmful substance wasn’t taken away until Saturday morning – nearly two days after the original call. In the meantime the fire brigade put warning tape around the container.

Barnwell House resident John Roach said: “Especially with all these acid attacks happening, you imagine all the youngsters round here, see something taped up, they might say ‘hello, what’s that? Oh look, hydrochloric acid.’

“You know what the herberts are like, if it had been left over the weekend all sorts of things could have happened.”

There were 752 acid attacks in London in 2018, the last year for which figures are available. Hydrochloric acid is not normally the substance attackers use, but it is still highly corrosive.

Mr Roach added that residents were also concerned about the possibility of breathing in toxic fumes from the acid.

He went on: “You could imagine kids even just being stupid and taking the tops [of the bottles] off and pouring it out. It’s lethal when it goes into the air.

“Plus everybody had their windows open because it was boiling hot.”

It’s unclear who dumped the acid, but Mr Roach said that he was disgusted by the thought that people could leave harmful substances lying around.

He added: “It’s a criminal offence, it’s bang out of order. It’s like pouring oil down a drain, you just don’t do it. It’s dangerous industrial waste.”

A Peabody spokesperson said:“We moved quickly once we became aware of this fly-tipping on our estate to ensure it was removed safely. It is a criminal act which has been reported to the Police. We’ve been liaising with the London Fire Brigade who secured the area, the Council and the Environment Agency, and immediately set about arranging the removal of the materials by a specialist company as required by law.

“We were informed that this would be done on Friday and are investigating why this did not apparently happen until Saturday. We would urge anyone with information or who may have seen something last week to contact the Police so they can take action against the perpetrators of this crime.”