Another family has holes drilled through ceiling in south Bermondsey ‘regeneration’ 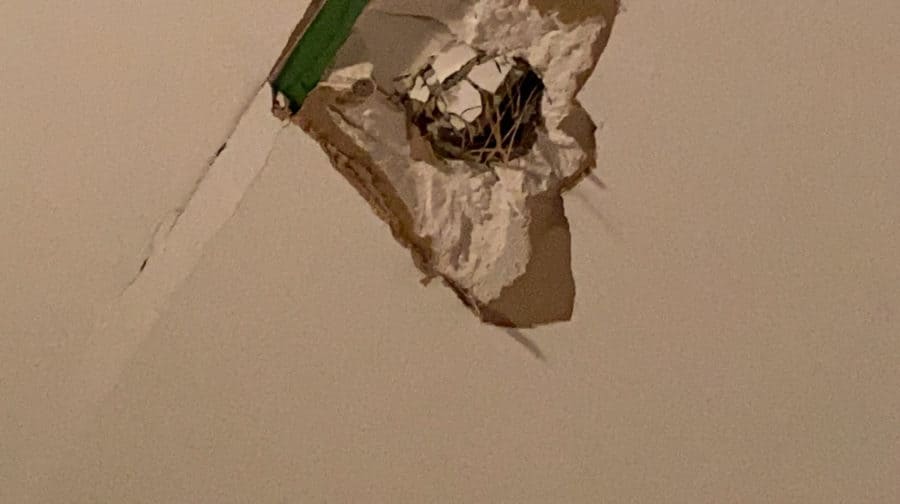 A second family living in a south Bermondsey block undergoing regeneration has had holes drilled through their ceilings by builders, and were told they had to wait weeks for repairs.

We reported last week that people living in Roderick House and Antony House on Raymouth Road have complained of “horrendous” noise from morning until evening, six days a week – making their lives “a living hell”.

Developers Apex Airspace, who are adding 30 more affordable flats to the blocks alongside landlords Lambeth and Southwark Housing Association (LSHA), said earlier the building work – which is set to last about a year – should cause “minimal disturbance” to current residents.

But Emma Bourne, who lives on the top floor of Antony House, has had a hole put through her bedroom ceiling by builders in the flat she shares with her partner and parents. Workmen have drilled two more holes in the bathroom and one in the kitchen.

Bourne said the hole was above her bed, which she has since moved because she was afraid debris could fall on her while she was asleep.

“The drilling on top of the roof is terrible. We knew something was happening with the ceiling but it wasn’t so bad at first, it still had the plaster on top of it.

“And then I think about an hour later they started drilling again and that’s when it got bigger and bigger. We called up the site manager, he came up and took pictures. He said ‘we can’t do anything’.

“My mum said ‘how can you leave my daughter in a bedroom with a hole on top of her bed?’. All the stuff [plaster] fell on my bed.

“I said to them ‘well I’m not going to live in a bedroom like that’. They said they couldn’t do anything until the work was finished.”

Bourne’s problems come after we reported on holes in another resident’s ceiling last’s week. Temi Adenle, who lives on the current top floor of Roderick House, beneath the level where builders are adding new flats, suffered a shock on Wednesday (April 28) when she heard a loud bang behind her and turned around to find a hole in her ceiling and dust pouring through.

“I just started crying,” she said. “I reported it to the housing officer yesterday and she just said ‘oh I apologise’ and told me I need to speak to the [building] manager on site.”

Apex’s Resident Liaison Officer, whose job is to manage the complaints from people who live in the building while construction is going on, said that the holes in both flats would be fixed when the work on the roof is finished, likely to be this week.

The holes in Bourne’s flat were drilled through in mid-April – meaning she will have had to live with the damage for about two weeks.

Adenle, who has lived in the building for six years, said that on top of the hole in her ceiling, she had been having similar problems to other Roderick house residents in recent weeks.

“It’s crazy. I work from home, I’m in meetings, most of the time on the phone. The noise, the banging, the drilling. It’s just too much – I’m having to move from one room to another.”

She lives in the flat with her four children, aged 15, 11, 10 and a one-year-old baby and said they are all suffering from the noise.

Her 15-year-old daughter is studying for her assessments to replace GCSEs, which are cancelled this year due to the ongoing Covid-19 pandemic – but the noise from the drilling is proving very disruptive.

The Apex officer said they would set up an empty flat for Adenle to work in.

Apex specialises in “airspace” development – essentially filling in gaps between or above existing buildings with more housing, and got £10m in loan funding from the Mayor of London for this project.

We reported last week that the project had turned into “a living hell”, according to some residents, who complained that work was going on much longer than they were initially warned, and was reaching dangerously loud noise levels.

One resident took noise meter readings on April 20 which they said shows building works reached 85 and 86 decibels. Experts generally say that long-term exposure to noise levels above 85 decibels could harm your hearing. Educational charity Noisy Planet say on their website that “sounds at or below 70 dBA are generally considered safe. Any sound at or above 85 dBA is more likely to damage your hearing over time.”

Replying to an approach for the original story, Apex added: “Apex Airspace are delighted to be working in partnership with LSHA to provide 30 much needed affordable homes in this innovative way – through the provision of airspace flats built off site.

Why did the Housing Officer not do her job and use her capacity as housing officer and complain to building manager?
Dereliction of Duty.