The virtual reality app, developed by a King's employee in his spare time, shows children what will happen in their MRI scan 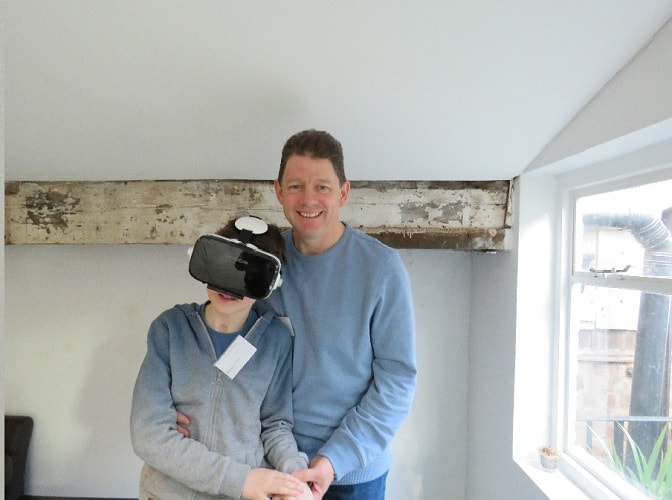 App user Matthew Down, 10 and Dad, Andy Down.

Launched at 9.15am today, the ground breaking app uses panoramic 360 degree video to take children through the stages of getting a scan before they have to experience the real thing.

The app is free to download from Google Play and designer Jonathan Ashmore hopes that it will make the MRI experience less distressing for youngsters.

“My office is next to the MRI scanner and I see so many kids getting upset when they come in,” said the physicist, who worked with a King’s colleague to develop the technical side of the app. “We put hundreds of thousands into scanners looking at how we can improve picture quality and I just thought, what if we could prepare the kids better?”

The app prototype has been in use at King’s since January this year and up to now, has been made available to selected young patients, particularly those who are having a first MRI.

Now it’s been officially launched, a link to the app will be provided on all MRI appointment letters to parents.

“Two of the feedback forms from the prototype said that the kids are really excited to come in for their scan after using the app,” he said.

MRI scans involve the patient lying inside a large tube and detailed images are produced of the inside of the body.

General anaesthetic is sometimes administered on children who’re too nervous or distressed to go into the tube, which can be risky for youngsters.

Matthew Down, 10, from New Malden, has been having annual MRI scans after having urgent brain surgery for triventricular hydrocephalus in 2014.

“The first time I had an MRI I was scared. I didn’t like the feeling of going inside,” he told the News. “I think the app is good because you can experience it before you go in the machine.”

“I think it’s a fantastic idea,” said Mum, Lisa Down. “Anything to calm your child down.”

Jonathan hopes that the app, called My MRI at Kings, can be rolled out to other NHS Trusts.