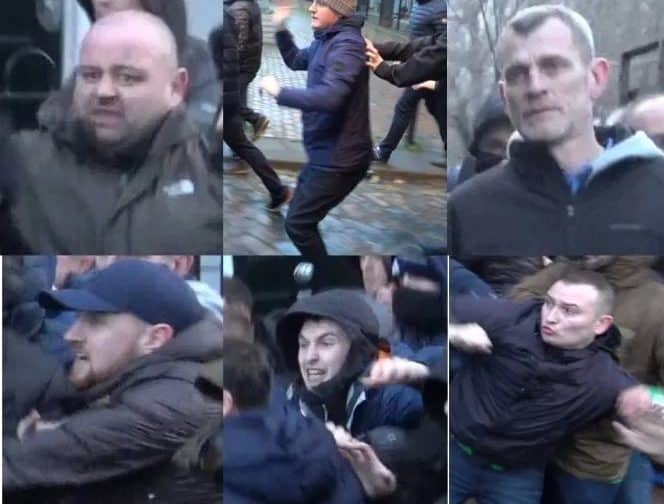 Some of the men police are seeking in connection with the disorder, believed to be Everton fans

Eighteen men, believed to be Everton fans, are being sought by police following January’s FA cup disorder between Millwall and Everton.

The violence, some of the worst football hooliganism the city has seen for some years, occurred prior and after the game, seeing a pub on Rotherhithe Old Road trashed and one man suffering life-changing face injuries.

A police officer was also injured during the melee.

Launching the fresh appeal, Detective Sergeant Matt Simpson from the Met’s Public Order Investigation Team, said: “We are working closely with Merseyside Police to identify the individuals in these pictures, who we believe to be Everton fans and I would urge anyone who recognises an individual to get in touch.

“We had an excellent response from the public when we issued the first set of images two weeks ago and I would now like to appeal again for the public’s assistance in identifying these individuals, who we believe were involved in unacceptable disorder before, during and after the game.

“This was some of the worst football violence we have witnessed for some time, leaving one man with a life-changing injury to his face.”

Police said anyone who recognises the individuals in these pictures should call them on 020 8246 9386 quoting the image number.

The men police want to identify