Architect says his vision for South Dock would be best boatyard on east coast, and bring council £500k a year 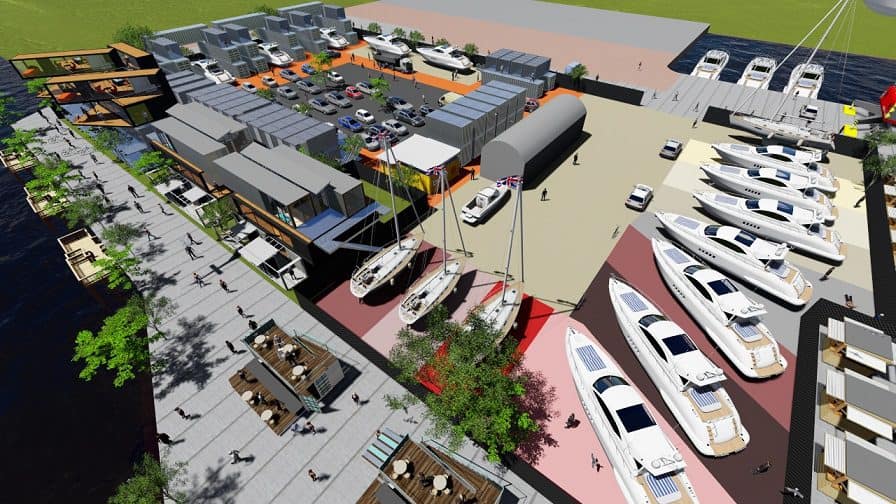 A Rotherhithe resident has drawn up alternative plans for South Dock Marina, claiming a proposal to build a 28-storey tower would see the boatyard “lost forever”.

Adrian Priestman, 43, intends to submit his own plans to the council by Easter, which would see twenty-foot storage containers used for businesses and studios if given the go ahead.

The architect, who is also a marine surveyor and steel fabricator, works in the marina and believes his plans could see it become the best boatyard on the east coast of England.

“The proposal is basically to sort the boatyard out and turn it into a container box park,” said Mr Priestman, who lives on a boat in Greenland Dock.

“All of those containers will be taken up very quickly by young companies and young business people who do music etc. and the idea is to set up the boatyard with twenty to 40-foot containers to be used as workshops and studios.

“I’ve also put twelve living containers [in the plans] that could be used for Airbnb, renting out or even to meet the criteria for affordable housing.

“They could make a very comfortable one-bed flat out of a container and the idea is to use one edge of the boatyard for the public for cafes etc.”

Mr Priestman, who is opposed to proposals  for a  tower block to be built next to the marina, said his plan could generate Southwark Council an additional £500,000 a year.

“We will need to sort out the power and the water and get a bigger crane in which will mean that the boatyard will become the best boatyard in London and on the east coast of England,” he said.

“It would create Southwark a very large amount of business for a very long time to come.

“People are already coming in from the canals to get their boats serviced and fixed, so it’s just feeding on something that they’ve already got.”

Mr Priestman said the boatyard would be shut down for two to three years if the tower block plans went ahead.

“There are probably ten or eleven registered businesses that run from the boatyard,” he said.

“As soon as the development [the tower block] happens the boatyard will shut down for two to three years, so that would all end.

“There are 140 to 150 people who live on their boats here that rely on the boatyard and all that will just be gone and the development would be the start of the boatyard being lost forever.”

There has been no confirmation of a fixed plan to the council, who are currently taking expressions of interest for the site.

I totally agree with the need for to increase the size of the Boat Yard, Southwark can’t be only homes and shops, we also need industry, Southwark is losing industry like the buiscuit factory and the printing press with this process of building.
Then there is the problem of the the noise, fumes etc, the tower block will either damage the boat yard, reducing it to a shadow of itself, and when the complaints start coming in then the dockyard would be the most likely candidate to be closed down altogether on health and safety grounds and “we learn by our mistakes” sort of excuse to follow!
The congestion and polution in our area is so bad, that we have a transport and health crisis, and Southwark wants to give British Land massive towers doing away with the resident approved Master Plan which presribed buildings of up to 8 floors and a 50 m pool acquatic center. Southwark wants to increase the buildings height 4 or 5 times and cut the prescribed pool in half and replace our superior 33 meter pool with a piece of rubbish like in Elephant and Castle.
Southwark also wants to take part of the school playground in Albion Street to build more flats, and grab the land of our Leisure Centre to build a 22 floor tower according to some comments.

Southwark NewsNewsArchitect says his vision for South Dock would be best boatyard on east coast, and bring council £500k a year