Architects call for their Rotherhithe bridge design to be considered 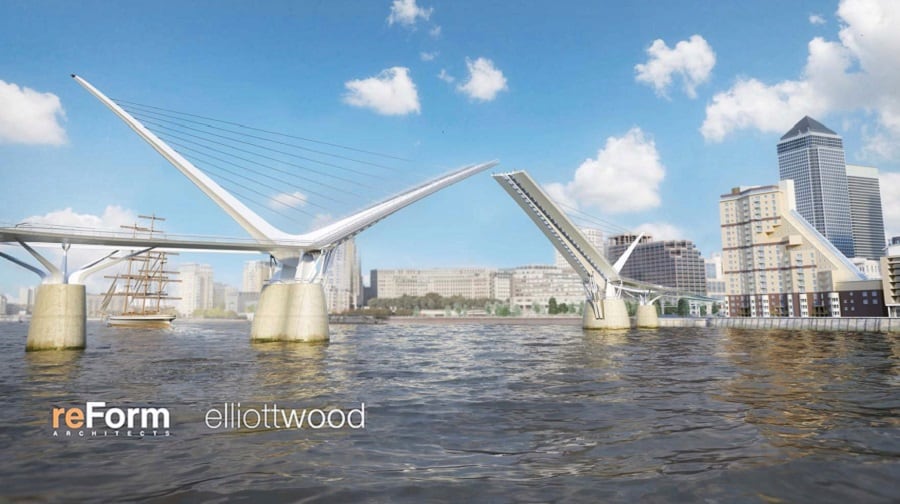 A Southwark-based architect firm fears it could be the end of the road for the Rotherhithe bridge design it has worked on for more than four years.

reForm Architects, based in Borough, came up with the “first serious proposal” for a Thames crossing between Rotherhithe and Canary Wharf back in 2013.

The SME (small and medium-sized enterprise) teamed up with Elliott Wood engineers and Buro Happold to draw up a design for a bascule-type pedestrian and cycle bridge.

However, a feasibility study carried out by firm Arcadis on behalf of Transport for London (TfL) has recommended a lift or swing bridge, rather than a bascule.

A bascule is a bridge similar to Tower Bridge which pivots out of the way, balanced by a counterweight.

TfL has put the design contract out to tender through its internal multidisciplinary framework made up of a number of large firms which have all seen the feasibility report.

reForm managing director Nik Randall fears this will mean the bidders will have no reason to team up with his firm since the report recommended only a swing or a lift bridge.

“Those firms were showing a lot of interest [in reForm’s design] until the documents came out saying it shouldn’t be a bascule,” he told the News.

“We’ve had Elliott Wood working with us all the way through so we know it works – it has been supported and reviewed by the Buro Happold team who are internationally regarded for their bridge designs.

“It’s not just a pretty image; it’s a viable design and we think it should at least be assessed.

“There might be a better design that comes out through the TfL procurement process but, unless our design is assessed against it, we cannot see how TfL can be confident they have the best value and best and most popular design.”

Mr Randall, who has lived on the border of Dulwich and Peckham for 30 years, said the “incredible strength of local support” for reForm’s design was one of the main reasons his team carried on.

“A project that is much-needed in that part of London could be delayed when they [TfL] have an option that’s popular,” he said.

“It should be a case of which is the right bridge for London, which is best for value and easiest to manage etc. and they won’t know that unless they also consider ours.”

Ben Plowden, director of project and programme sponsorship for TfL Surface Transport, said: “We are currently progressing a new crossing between Rotherhithe and Canary Wharf, which will provide a much-needed walking and cycling connection between the two areas.

“The work we have carried out so far has suggested that a bridge could be the best option.

“We recently undertook a public consultation seeking views on the best location and we hope to publish the results shortly.

“While a navigable bridge is TfL’s preference, no final decisions have yet been made, and Londoners were asked to comment on a number of design considerations as part of the consultation process.”

A spokesperson for TfL added that any feasibility work carried out would not advantage anyone in bidding for the next stage of design work because the appointment would be based on the capabilities of the team, rather than the evaluation of a design.

A poll is currently running on the Brunel Bridge website, set up by a non-political community group, asking people to choose which type of bridge they would prefer: http://brunelbridge.london/design-poll/

Southwark NewsNewsArchitects call for their Rotherhithe bridge design to be considered