New: Architects reveal they have designs on Peckham Lido 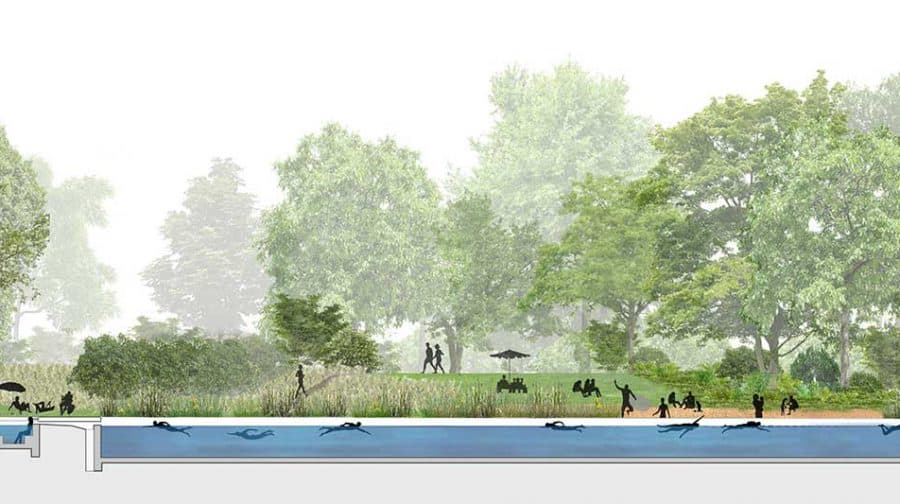 Plans to revive the buried lido lying beneath Peckham Rye are going swimmingly as a local architect has won the bid to draw up a design for the project.

Studio Octopi, based in Burrows Mews, SE1, has released provisional designs which show the pool flanked by the trees at the northern end of Peckham Rye.

Chris Romer-Lee, who will be leading on the project, said he would be drawing influence from their previous designs for a floating lido on the Thames.

The original lido, located at the tip of the park bordering Peckham Rye and East Dulwich Road, dates back to 1923, although swimming is known to have taken place at a pond on the same site as far back as the 1800s.

The lido was closed, like so many others, in 1987, but local enthusiast Ben Lloyd-Ennals has been championing a campaign to revive the leisure facility since this time last year.

With thousands of signatures on an online petition and Harriet Harman, parliamentary candidate for Camberwell and Peckham on board, the campaign has gained much local support.

The initial designs put forward include a 50m heated and chlorinated pool with the scope for a smaller natural pool alongside it, which could draw water from the river Peck running directly under the site.

The pool would be surrounded by single storey pavilions housing a gym, cafe and community space.

Studio Octopi now intend to work closely with the Peckham community to come up with a design everyone is happy with. Once the design is finished, it can be used to seek funding from both private business and government grants.

Southwark NewsNewsNew: Architects reveal they have designs on Peckham Lido