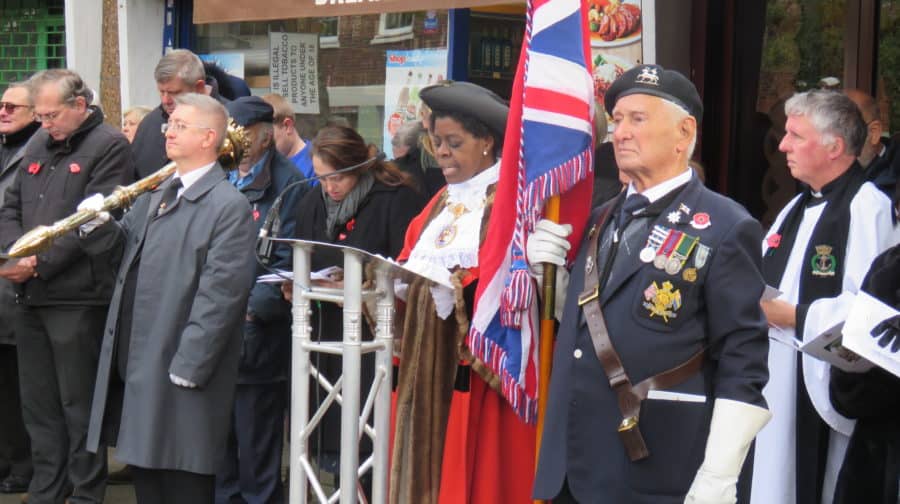 Worshipful Mayor of Southwark, Cllr Sandra Rhule, reads a poem at the event

Bermondsey’s West Lane memorial turned silent for two minutes at 11am on Monday as residents joined the nation in observing 101 years since the Armistice.

The commemoration, organised by local residents, was led by Canon Gary Jenkins, of nearby St James’s Church, with readings by the Worshipful Mayor of Southwark Cllr Sandra Rhule.

Among those laying wreaths in memory of the fallen were representatives of the Bermondsey and Rotherhithe Royal British Legion, councillors from both Labour and the opposition Liberal Democrats and local primary-school pupils.

It marks the centenary since the two-minute silence to commemorate the Armistice in 1918 was first observed. Local school children were among those paying their respects

The well-attended event saw those assembled hear ‘We Shall Keep the Faith’, the famous remembrance poem by Moina Michael, while the Bermondsey and Rotherhithe Royal British Legion spoke the Kohima Declaration: “When you go home, tell them of us and say, ‘For your tomorrow, we gave our today.’”

READ MORE: Bermondsey: Southwark Council U-turns on not to commemorate Armistice at memorial after fierce backlash

Services were also held across the borough on Sunday with the official council-led service taking place at Walworth Square under the direction of Dr Jane Steen, the Archdeacon of Southwark.

Residents across Southwark paid their respects for those who lost their lives in conflicts at other locations in the borough too, including at Kennington Lane, Camberwell Memorial and the Dulwich Memorial.

The Bermondsey Armistice event had previously been the subject of a council U-turn after officials said they would hold a service at its offices in Tooley Street rather than attend West Lane.

However, after a backlash from Bermondsey and Rotherhithe residents, the council said it had “noted the strength of feeling” in the local community and that it would attend.