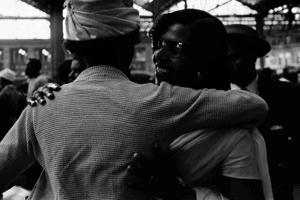 Four artists have been shortlisted to create a monument to the arrival of the UK’s first large Caribbean population at Waterloo station.

The monument to the ‘Windrush generation’ – named after the ship that carried some of the new arrivals in 1948 – was announced by then-Prime Minister Theresa May in 2019.

The four artists shortlisted are sculptor and painter Basil Watson, multimedia artists Jeanette Ehlers and Valda Jackson and sculptor, photographer and filmmaker Thomas J Price. All four are Caribbean or have roots in the region. Jackson and Watson’s families were part of the Windrush generation.

Actress and TV presenter Baroness Floella Benjamin is chair of the Windrush Commemoration committee, which announced the shortlist.

“We are entering a really exciting stage of this project with the realisation of the monument just round the corner,” she said.

“Our shortlist contains a vibrant mix of talented artists, all with lived experience of the Windrush legacy and we will now see proposals developed into a vision for the national monument to the Windrush Generation in London Waterloo station.

“The monument will be a permanent place of reflection and inspiration for Caribbean communities and the wider public, especially children. It will act as a symbolic link to our past, and a permanent reminder of our shared history and heritage for generations to come.”

May announced the monument in the wake of the Windrush scandal in 2018, when an investigation found that dozens of Caribbean people who had come to the UK after the Second World War had been deported or denied vital medical treatment and legal rights by the British government in recent years.

A 2020 review found that the Home Office had displayed “thoughtlessness and ignorance” in its treatment of these people. Many of those affected by the scandal have still not got the compensation they were told they were eligible for.

Some campaigners think the Windrush Monument is inappropriate because of its location and an alleged lack of consultation with the UK’s Caribbean community.

The Windrush Foundation, an organisation set up in 1997 to celebrate the contribution of Caribbean immigrants to the UK, said the monument should be in Brixton, where many of the community first settled.

Co-founder Arthur Torrington added that his group was not consulted about the monument. The government said organisers spoke to “over 250 international and British cultural leaders, curators and leaders in the Caribbean community”.

Organisers plan to announce the winning artist in October for black history month. The monument is expected to be unveiled on June 22 2022 – the anniversary of the arrival of Empire Windrush.