‘Ask for Angela’ safety scheme rolled out across London

'No one should have to put up with unwanted attention or predatory, sexual or violent behaviour' 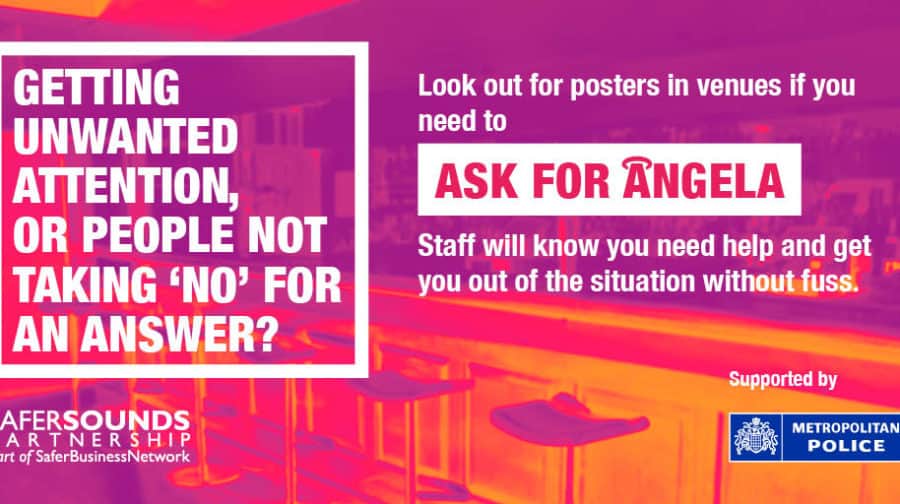 The ‘Ask for Angela’ safety initiative, where anyone feeling unsafe, vulnerable or threatened on a night out can discreetly ask for help from venue staff, is being rolled out across London venues.

If a customer asks staff for ‘Angela’, it will signal to them that they need help. A trained member of the team will then offer help, possibly through finding a friend, helping them into a taxi home or calling security or the police.

The scheme is the result of a partnership between the Met, London mayor, and Safer Sounds – part of the Safer Business Network  – and licensed venues across the city.

Now they are aiming to raise awareness ahead of the bank holiday, and a rise in teenagers on their first nights out since the pandemic and turning eighteen, including those returning to university in the autumn.

Metropolitan Police and the Mayor of London have joined together with Safer Sounds, which is part of the Safer Business Network, and licensed venues across the Capital to help keep people safe while enjoying a night out.

Many of London’s bars, clubs and other licensed businesses are busy throughout the night, and customer numbers are expected to increase over the August Bank Holiday weekend. In some cases, due to the lockdown, this will be the first time some 18 and 19-year-olds have set foot in licensed premises.

So far, over 350 frontline staff from over 150 London venues have been trained since the start of August.

Ask for Angela was first developed by Lincolnshire County Council and adopted by the Met in 2016, as a local initiative.

DAC Connors said: “I am really pleased to see that so many venues are embracing this scheme and I would urge anyone who finds themselves in an uncomfortable situation in a licensed venue to Ask for Angela.

“No one should have to put up with unwanted attention or predatory, sexual or violent behaviour.

“This scheme makes it easier for anyone feeling unsafe or threatened on a night out to access support quickly and discreetly. This might mean reuniting them with a friend they were out with, contacting family or friends, calling a taxi or, if necessary, involving security staff or police.”

She added: “The Met Police is absolutely committed to tackling violence. We want everyone to be safe anywhere in London and be able to go about their business without fear or feeling unsafe.”

Deputy mayor for policing and crime, Sophie Linden, said: “The Ask for Angela initiative is a great example of London Councils, the Met Police, City Hall, Safer Sounds, and venues across London working together to deliver real change.

“It builds on the success of City Hall’s Women’s night safety charter – which is working to prevent and reduce sexual violence and ensure public spaces are safe at night – and is an important part of our comprehensive approach to tackling violence against women and girls.

“With restrictions lifting and many of London’s clubs and bars open and busy throughout the night, it’s vital we do everything we can to prevent and reduce sexual violence and harassment.

“The Ask for Angela initiative will make accessing vital support quick and easy for those feeling unsafe or threatened and I would encourage all of London’s night-time venues to sign up.”

Southwark NewsNews‘Ask for Angela’ safety scheme rolled out across London