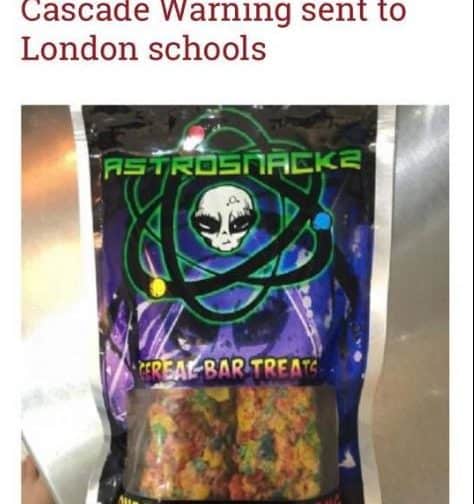 Warnings of a supposedly dangerous snack-bar targeted at children causing “severe hallucinations” have been labelled as “unverified” and “possibly fake” by the authorities.

Supposed ‘Astrosnacks’ cereal bars have caused concern among parents after social media posts warned they were being sold to children, making them severely hallucinate and become violently ill.

The possible ‘hoax’ was spread to Southwark parents after a London Trading Standards email was routinely passed onto the 150 schools in the borough by the council.

At least one school then posted the warning on its site, despite London Trading Standards saying the message was not intended to be made public.

A Bermondsey primary school, which shared the now-deleted warning on its website, said it had received an email about “[a] fake snack bar called ‘Astrosnacks’ – are being sold to children.

“They cause people to be violently sick and have severe hallucinations.

“The Met Police has been warning schools and parents to be alert. They are being sold around Islington, Highgate and Archway but may move into other parts of London.”

In response to the school’s post, one concerned Southwark resident said on social media: “Please keep a look out for these ‘acheter kamagra jelly’ and warn your children not to touch them!!” London Trading Standards told the News that it “has not issued a warning to schools in relation to these alleged fake snack bars.”

“We received an unverified report from a journalist about these bars and circulated this to fellow trading standards colleagues for information,” said Stephen Knight, LTS Operations Manager.

“This was not intended to be forwarded to schools or parents, as the report remains as yet unverified.”

The Met Police also said it had not received any crime reports about it and that the allegation of  tampered cereal bars being sold to children causing hallucinations was unsubstantiated. “Police have been made aware of an incident involving a possibly fake snack bar called ‘Astrosnacks,’” said a Met Police spokesman.

“No crime report has been made and the allegation has not been substantiated.

“Police have not been able to speak directly to the parties who were apparently affected.

“As a matter of routine, and to safeguard young people, police have passed this information to schools local to the incident.”

Anyone with substantiated claims about so-called ‘Astrosnacks’ can contact police on 101 referencing CAD 5133/05MAR.