Welsh steed comes to the rescue in London-wide ass-shortage 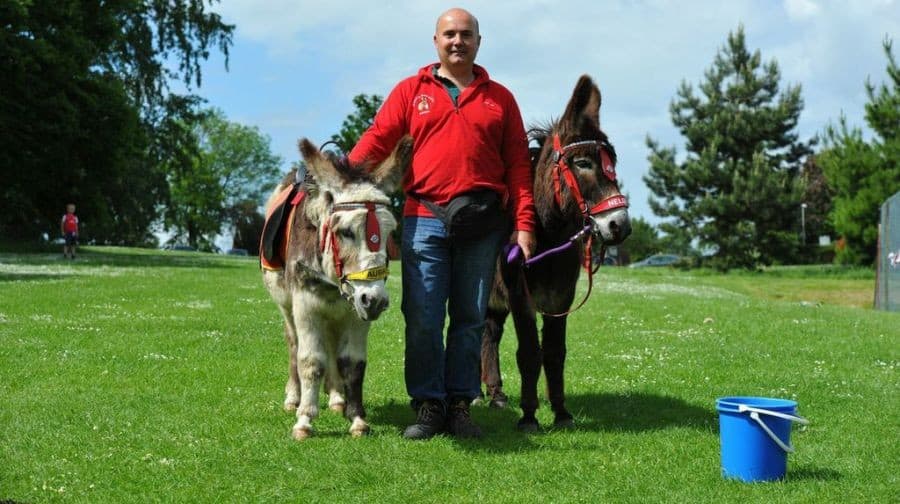 In the midst of a London-wide donkey shortage, Aubrey the Ass is being shipped in from Wales to save Walworth’s Palm Sunday procession this year.

There was a donkey-disaster last year when ‘Bruno’ was a no-show, causing three-year-old Isla Rose Penfold, with the help of her mother, to write to St Peter’s Church to say she was ‘very sad’ and asked if he had ‘forgotten his map’.

This year Patrick Blunt, chair of the Walworth Town Team and Father Andrew Moughtin-Mumby, Rector of St Peter’s in Liverpool Grove, are taking no chances.

With some help from Southwark Council, the Walworth Town Team is stumping up £450 to secure Aubrey, all the way from Kidwelly in Carmarthenshire, to make sure the expectant children have biblical livestock to pet on the annual march from Liverpool Grove down East Street to Nursery Row Park.

Aubrey with his colleague Nelson – hard at donkey work

“The point is there’s no other way,” said Patrick, who feels it’s important to spend money getting a ‘reliable’ donkey. “The donkey we knew was not prone to biting people. You could get a cheaper donkey but he might be of an unfriendly disposition. It’s going to be petted by children so you have to know that he’s reliable,” he said.

“When we first started doing this no one else was using donkeys in their Palm Sunday procession but now everyone’s doing it,” added Patrick, who confirmed Aubrey will be travelling up with two minders who will keep him fed and watered before the procession on March 29.

“Dennis the donkey used to eat all the fruit and veg out of [East Street trader] John Wallington’s barrow so we’ll have to keep an eye on him,” joked Patrick.

Aubrey, who works for Mike’s Donkeys, is specially trained for processions and has done many Palm Sundays before, so there is no way he can make an ass of himself on the day.