“I don’t think people realise how close we came to all-out battles in London between Communism and Fascism, before WW2 brought the country together,” Beezy said 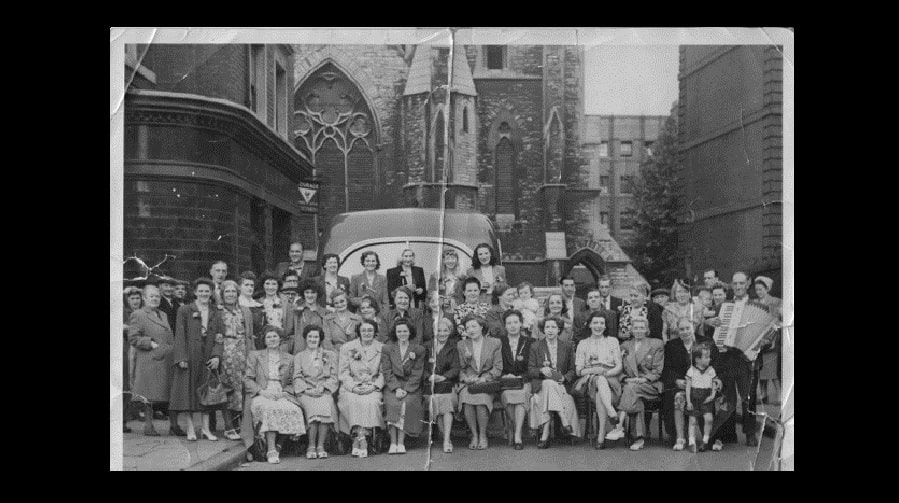 Photo taken in the late 1940s on a pub Beano (day out) in Walworth, before the group travelled to Margate On the back row: the girls’ mum, Margaret, next to daughter Kathleen. End-right girl on the back row is Eva..

Every old-school south Londoner knows the folklore of cockney criminal Frankie Fraser, whose violent tendencies were infamous on the streets of Walworth.

But few would perhaps know about the equally incredible lives led by his three sisters.

Having chronicled the life of old mad Frank, author Beezy Marsh has turned her pen to Peggy, Kathleen and Eva; in her new book ‘Keeping My Sisters’ Secrets’.

Beezy – a former Sunday Times journalist whose biography ‘Mad Frank & Sons’ was published last year – was given “unprecedented access” to interview the family and learn about the three bold women, who grew up in Howley Terrace, in Waterloo during the 1930s.

There was Eva, the “naughty girl” of the three, who became a key figure in the all-girl gang, the Forty Thieves, who targeted the West End’s big department stores”.

“Eva got into shoplifting, but had a heart of gold. It’s clear she still had to feed her family by acting on the wrong side of the law” Beezy said. “She was one of the top thieves during the war.

“But she was once caught stealing stockings and was sent to prison.”

Front cover of Keeping My Sisters’ Secrets by Beezy Marsh

Beezy, from Ealing, explained that it was in prison that Eva met Diana Mosley, wife of Oswald – leader of fascist Blackshirts who were a fearsome presence in London in the 1920s and ‘30s. Somehow Eva found herself in the opposite company of her eldest sister Peggy, whose boyfriend was heavily involved in the Communist Party, whom the Blackshirts fought in the famous Battle of Bermondsey, and the even more famous Battle of Cable Street.

“I don’t think people realise how close we came to all-out battles in London between Communism and Fascism, before WW2 brought the country together,” Beezy said.

Peggy stayed out of crime and worked for the Post Office. Her wartime experience was spent “on the switchboards during the Blitz”. Though like Eva, she struggled to come to terms with the choice facing women – to work or marry.

“You understand the choices that lay ahead of you if you were a working-class girl. Before World War Two, if you got married you were expected to leave work and stay at home,” Beezy said.

“There’s one account of one of Peggy’s colleagues pretending to still be single so she could carry on working as a Post Office manager.” Whereas for Eva it was about her “earning her own money on her own terms”.

The middle sister was Kathleen, who constantly aspired to make it as an actress, and make use of her striking good looks. Had it all gone to plan, she could have inhabited a very different side of the West End to her little sister Eva.

But Beezy said: “[Kathleen] experienced the slums of Waterloo as a place buzzing with excitement and the tight-knit community, with its Catholic Church parades, which gave her the chance to shine,” though she instead works at the old Hartley’s jam factory in Bermondsey.

Beezy reveals how the girls’ father would beat their mother – a big influence on their outlook. “He was working all the hours he got sent, but he couldn’t make ends meet. The family was hard-working and kept themselves clean [out of crime].”

Then there’s Frankie himself, who makes a brief appearance. The reader is also introduced to the girls’ brother Jim, who became a sergeant in the army and fought in North Africa.

‘Keeping My Sisters’ Secrets’ was published on July 27 by Pan Macmillan.