Mary Graham and Reema Reid have now been nominated for a further set of awards. The ceremony will be broadcast on the BBC later in the year 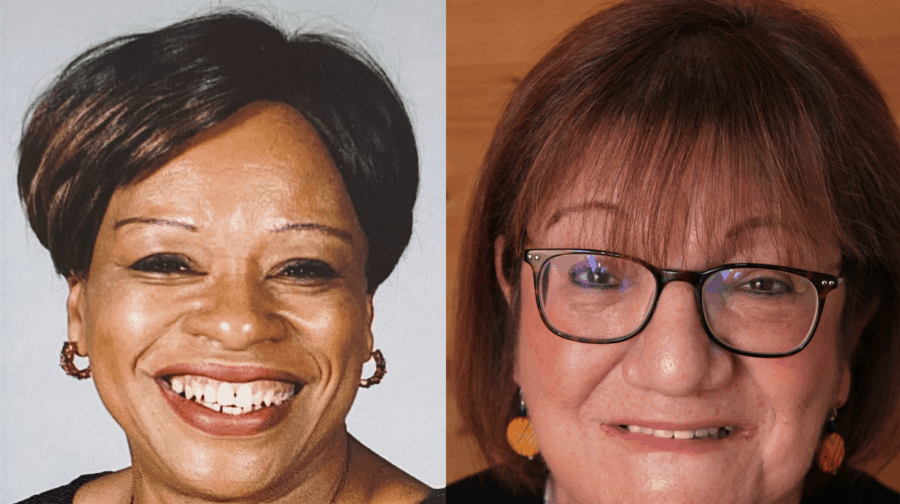 Mary Graham, of the Kingsdale Foundation School in West Dulwich and Reema Reid, headteacher of Hollydale Primary School in Nunhead, were both given the Pearson awards on National Thank a Teacher Day.

Ms Graham, director of performing arts at Kingsdale, was given a lifetime achievement award. She has mentored “hundreds” of younger teachers and pushed for better music tuition at nearby primary schools. She ran a music scholarship programme that helped more than 1,500 pupils get to grade six or above on various musical instruments. Ms Graham also ran music tours to countries including Brazil, Namibia, and Canada. Pearson said her influence was best shown by the large numbers of former students who now play in the West End.

Ms Graham was “central” to Kingsdale’s drastic improvement from the 1990s, when it was put under special measures.

Steve Morrison, executive headteacher of The Kingsdale Foundation, said: “I have been involved in this wonderful profession at a local and national level for many decades. I have had the pleasure of collaborating with, observing and evaluating the work of the best of the best. However, if there are more admired and impactful practitioners on an individual level than Mary Graham then I have yet to come across them!”

Reema Reid was given an award for headteacher of the year. She was praised for creating an inclusive school environment at Hollydale for children of all backgrounds, and for improving the school’s performance. Ms Reid is also part of Southwark Stands Together, the council’s initiative to tackle racism launched last year.

Congratulations to the awesome ?@HollydaleSchool? head teacher for this well deserved Teacher of the Year @TeachingAwards! Good on you Reema Reid, everyone, including all of us at @lb_southwark? are incredibly proud of you ?? ? pic.twitter.com/HQaZI9ttyw

She said: “It is an honour to join the pupils and staff at Hollydale Primary School to present Reema Reid with such a prestigious national award recognising her outstanding dedication and exceptional leadership as headteacher.

“Reema’s passion and commitment to improving the lives of young people extends from the classroom right into the local community, where she is a visible and active role-model. She is a key member of our Southwark Stands Together workforce, where her invaluable expertise and experience in education informs how we work together to address racism and inequality in our schools. We are so lucky to have headteachers like Reema working in Southwark, playing a pivotal role in providing the best possible start for all our children and young people.”

The awards were launched in 1998 by Lord Puttnam “to recognise the life-changing impact an inspirational teacher can have on the lives of the young people they work with.”

Some 102 teachers across the UK were given the silver Pearson awards this year. Ms Graham and Ms Reid have now been nominated for gold awards, which will be broadcast on the BBC later in the year.

This year’s awards coincide with Thank a Teacher Day, a campaign to recognise teachers for their work.

Sir Michael Morpurgo, author of dozens of books including War Horse and the Butterfly Lion, former teacher, Children’s Laureate from 2003-2005, and President of the Teaching Awards Trust, said: “Thank a Teacher Day gives us all a chance – children, families, all of us – to pay tribute to those wonderful educators who change more lives than they will ever know.

“Today we say thank you to the teachers who have helped our young people navigate these most difficult of times, and who will continue to inspire countless young minds over the coming years.”