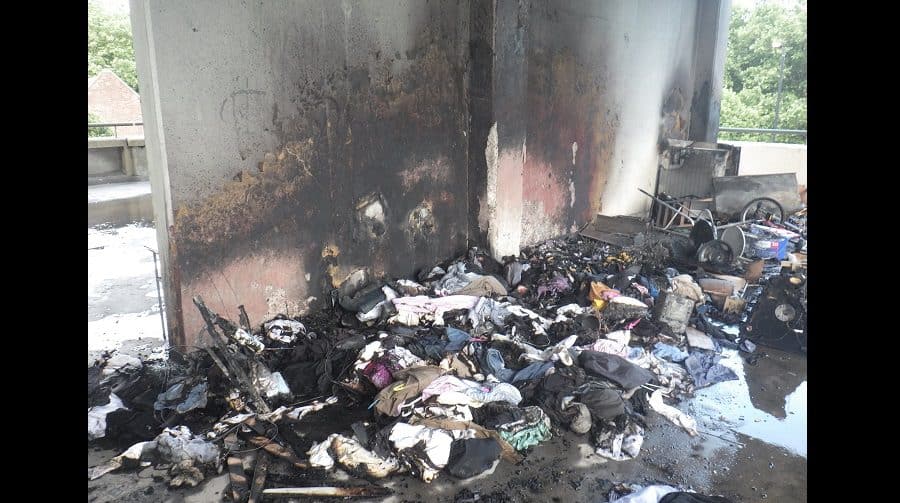 Police, fire officers and an air ambulance were called to a balcony blaze at the Aylesbury Estate, believed to have been caused by a cigarette.

It has been confirmed by the Met that no one was found injured following the fire on Saturday May 28, at about 6pm.

Sister Catherine Msoni, manager of a foodbank located in Thurlow Lodge (at the ground floor of Wendover), said more than 50 people gathered to watch, as about ten residents were evacuated.

“A lot of people were standing watching the big fire. People came around from Burgess Park to watch what was going on,” Sister Catherine said.

“It was near the corner of the block, on the side where the hall is based, opposite the park.

“Someone told me they heard a ‘boom boom boom’. A homeless man came running into our office and told us about there was a fire.”

“It only took them about fifteen minutes to put it out. I think it was coming from the balcony walkway, not from someone’s flat.”

A London Fire Brigade spokesman said: “If you smoke, it’s so important to ensure your cigarette is disposed of carefully.

“It’s really dangerous to throw cigarettes off balconies, and as we’ve seen here they can easily start fires. Make sure your cigarette is fully out and use a proper ashtray that won’t burn or tip over easily, and never leave your lit cigarette unattended.”

A police spokesman gave the following statement to the News: “Police assisted the London Fire Brigade on Saturday, May 27 at 6:05pm following a fire at a block of flats in Thurlow Street.

“Residents from the building were evacuated as a precaution.

“No one was found to be injured. LFB dealt with the blaze. There were no arrests.”