Aylesbury Estate foodbank fights to keep its home, but time is running out 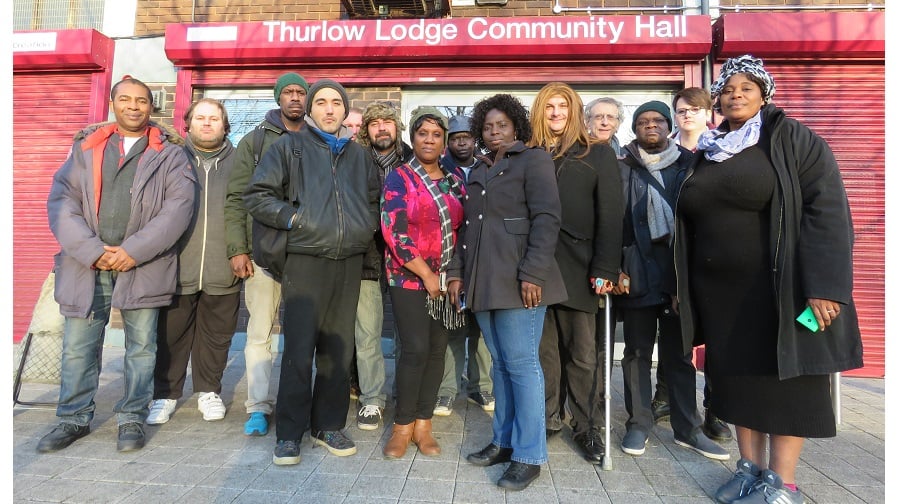 An award-winning food and clothes bank is fighting to take over an Aylesbury Estate TRA hall, or it will face being made homeless.

The council has given the Divine Rescue charity – which feeds and clothes 100 people a week – a two-week extension to remain at the Thurlow Lodge Community Hall until January 20.

But residents and campaigners from Defend Council Housing have come to the charity’s aid. They have set up a new TRA to run Thurlow Lodge, which was given up on December 30 by a managing committee of other local TRAs and the Creation Trust.

It was then decided by the management committee that the hall should be  transferred to the council and made vacant, a decision triggered when the Thurlow Lodge TRA (of the three included in the committee) suddenly disbanded.

There were heated scenes on January 6 when council officers visited the hall. The officers were met by volunteers and housing campaigners who demanded the charity be allowed to stay, and have since begun an “occupation” of the building.

Divine Rescue’s manager Sister Catherine Msoni told the News: “This is heart breaking. Over 100 people come every day with different issues. We’re a food bank and a lot of families depend on us.”

Southwark Council told the News that Divine Rescue was warned in July last year that it needed to find new premises in time for January 6. But the charity said it had no luck finding a new base, despite appealing to Camberwell and Peckham MP Harriet Harman in December and Southwark’s cabinet member for housing, Stephanie Cryan in November.

Fiona Colley, Southwark’s cabinet member for finance, modernisation and performance, said it supported the management committee‘s decision to close the hall, due to “future plans to demolish the building, escalating costs and dwindling numbers of people using the centre”. Cllr Colley has since confirmed the two-week grace period for Divine Rescue.

She added: “It will be some time before the building is demolished and the council wants to see Thurlow Lodge continuing in community use for as long as possible.

“We plan to go out to tender for a new organisation to run the centre as soon as we have established its condition.”

The council has yet to say whether it will accept the new TRA set up by Defend Council Housing and Divine Rescue as new leaseholders for the hall. This Saturday a ‘Solidarity Afternoon Tea Party’ will be held at the hall from 3pm. On Sunday at 5.30pm, the newly-created TRA will have its inaugural meeting, followed by a 6:30pm ‘Occupation Meeting’.

Catherine’s brother-in-law, Nathan Msoni, said: “A lot of people will be thrown in the cold. If we have to move abruptly, even if we do find a new place, it will be damaging.”

He added: “We have been overwhelmingly recognised, and won so many awards for the work we do. Only in 2015 the council gave us a Housing Heroes Award.”

“Anyone can become homeless at any time. Without blowing our trumpet, we have done a very good job and we deserve better than this.”

Southwark NewsNewsAylesbury Estate foodbank fights to keep its home, but time is running out