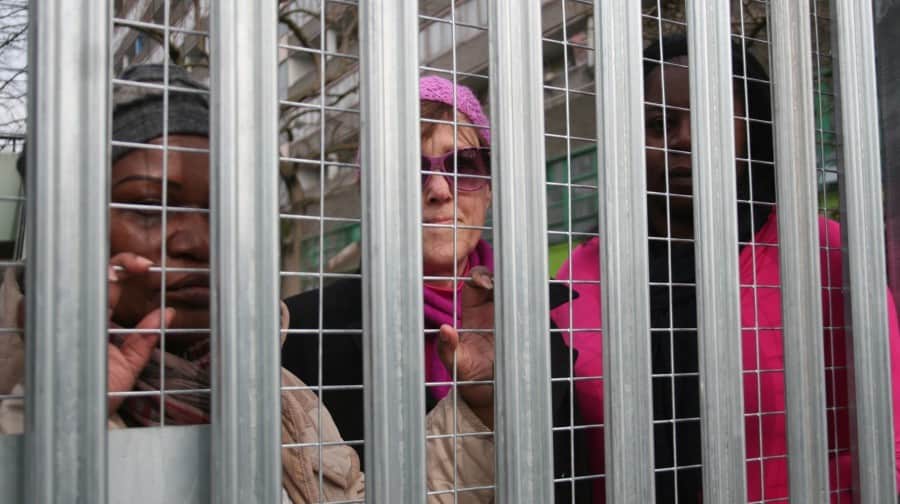 Residents on the Aylesbury Estate say it’s like living in Alcatraz since barbed fences were erected and locked gates installed around their blocks.

It was lockdown at the weekend when security was upped in preparation for a march to ‘fight for the Aylesbury’, which ultimately saw squatters breach the defences to set up home in some of the derelict homes in the Chiltern block.

“It’s a bit ironic that with all this security, the only people who could get in here on Saturday were the squatters,” said Gil Mutch, 58, who has lived in her Bradenham flat for nearly twenty years.

The fences and gates went up a couple of weeks ago in response to security fears raised by leaseholders living in largely derelict blocks where some of the walkways were not lit at night, attracting crime and anti-social behaviour. But residents say they have been stopped from entering the gates nearest to their homes by security guards and told to walk all the way around to a different entrance on Westmoreland Road.

Agnes Kabuto, 57, says her elderly disabled mother, who lives with her in Chartridge block, has been “very upset” by the locked gates. “My disabled mother can’t go all the way around to get in when all the entrances are blocked. They are making our lives a misery. It’s like Alcatraz. It’s no longer like a home. It’s like a prison really,” she said.

When Agnes tried to get in late on Monday night, she was asked to go around to the Westmoreland entrance just to ask permission to gain entrance near her home. “You can hear them laughing at you,” she said. “We are like caged animals. Even dogs are treated better than this.”

Fences are topped with metal barbs to deter intruders

When leaseholders met with council officers to discuss their security concerns last year, Beverley Robinson says she asked for security doors with swipe cards to each block.

“We want security but we want to be able to get into our homes and not feel intimidated at the gates when we are trying to get in. We should have keys so we can come in whatever gate we want to come in,” she said.

Cllr Mark Williams, Southwark’s cabinet member for regeneration, planning and transport, said: “The fence was installed as a direct response to the remaining few residents who expressed concerns about security on the site and anti-social behaviour from people who aren’t residents.

“Putting up the fence follows advice from the police, fire brigade and our officers who had similar experiences with other largely empty housing blocks. There are three security gates and security guards are on site, we will continue to review these arrangements to make sure they work for the residents and that we respond to any feedback we receive.”

Police were stationed at Tooley Street on Tuesday afternoon when the cabinet were discussing progress on the regeneration of the Aylesbury. It is thought previous action taken by campaigners, who poured rubble on to the floor of Southwark’s HQ, sparked the security concerns, but this had not been confirmed at the time the News went to press.