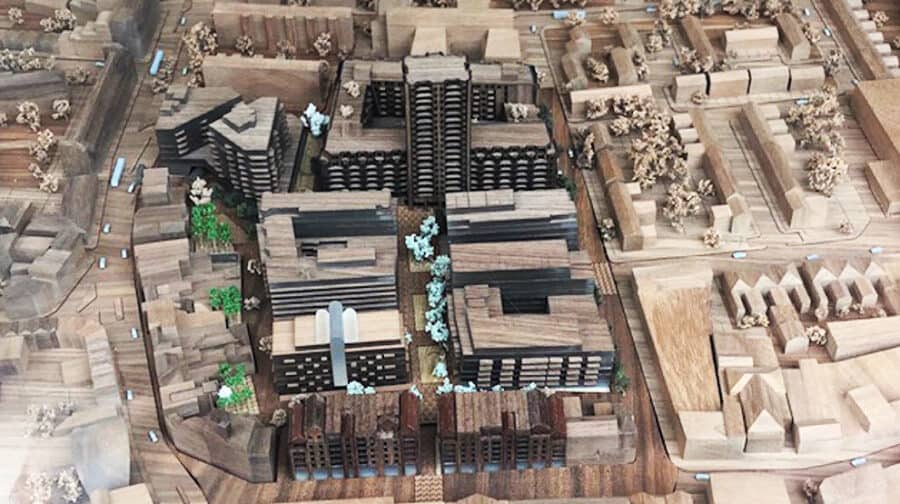 A CGI of the new Aylesham Development

Businesses and residents in Peckham are appealing for the Aylesham Centre’s developer to take its plans for three new tower blocks back to the drawing board.

More than 1,600 people have signed a petition calling on Tiger Developments to scrap its designs and start again with more input from a community campaigners say has been largely ignored, with one business owner describing them as a ‘slap in the face’.

Concerns are based around not only the specifics of the plans; including details of ‘out of character’, high-rise buildings and affordable housing, but also the way in which the ‘inadequate’ consultation has been handled. A CGI of what the new site could look like

The News understands the developer is hoping to submit its proposal to Southwark Council’s planning committee by the end of this month.

A coalition of groups has come together under the banner of ‘Aylesham Community Action’, including heritage group Peckham Vision and businesses from the Bussey Building, calling for Tiger to postpone.

Tigers’ plans include three blocks of eight, eleven and twenty storeys high. To put it into context, this would mean a tower block fourteen storeys higher than Frank’s Café on the site of the current Aylesham Centre.

“The changes will affect thousands of residents and hundreds of local businesses and change the character of the local economy and the town centre,” details the change.org online petition.

“The developers have provided only a few weeks for comments in August, during the holiday season, and while local people are still suffering or not yet recovered from the Covid-19 health emergency and lockdown. This is not genuine consultation.”

The developer set up a website detailing its plans during the pandemic – but was unable to offer face-to-face meetings or a public exhibition.

Its website says the new centre will “offer a greater choice of new shops and a new Morrisons store, new bus routes and improved connections and importantly provides the opportunity to deliver much needed new homes, all within a better people focused environment.”

The scheme will include over 900 high-quality new homes with a ‘target’ of 35 per cent being ‘affordable’.

If followed to the letter, this means 70 per cent would be social housing, with the remaining third marketed at 80 per cent or under of market rent, or rented or sold to people with household incomes between £47,290 and £64,863.

Other details include better pedestrian access and transport links as well as environmentally friendly materials and energy sources such as solar panels, green roofs, and a series of landscaped courtyards with more than 40 per cent more trees and shrubs.

Peckham Resident Eileen Conn told the News: “Tiger Development have just conducted a very poor consultation on a major redevelopment of Peckham town centre at the worst time – during August the holiday season, and when all of us are still coping with the impact of COVID-19.

“It is essential for good planning that they give more time to have a good consultation. We want them to talk with us in Aylesham Community Action about the way that consultation can be completed properly.”

Mickey Smith, the director and founder of the Chronic Love Foundation, which runs the CLF Art Café in the Bussey Building, the South London Soul Train night and Chronic Fonk Records, said he believed the current designs would “literally scar, obliterate and dominate the skies of Peckham”.

“To be clear, we and most people in Peckham have no problem with the idea of a new community-sensitive build across the Aylesham Centre; one that improves the area, taking into consideration what Peckham is and wants to be,” he added.

“However, this ‘plan’ does not to do that, far from it, and frankly put is an absolutely slap in the face.”

Tiger Developments highlighted that although the latest stage of the consultation was held this summer, the process had first began four years ago.  It maintains that submitting an application will not be ‘the end’ of its community engagement.

The developer’s managing director, John Nesbitt, told the News: “Tiger Developments has been engaging with local people and businesses about the proposals for the Aylesham Shopping Centre since 2016.

“Over this period, the planning application has been shaped by this feedback and we are delivering key benefits for Peckham that people have told us they want to see.

“This includes delivering over 900 new homes – of which 37 per cent will be affordable; a new retail centre that can accommodate a variety of occupiers from small independent businesses to high-street chains, alongside a new and improved Morrisons supermarket; a new bus road running through the site, creating improved public transport connections and passenger interchange through the town centre; and 2.8 hectares of new accessible landscaping (equivalent to three football pitches), including dedicated play space for children.

“The Aylesham Centre has the potential to be transformed into an exciting new destination that builds upon Peckham’s strengths and complements the existing vibrant town centre offer and we want to create a place that is attractive to a wide range of businesses that will serve and support the local community, create new jobs and attract new visitors to the area.

“This is not the end of our engagement programme and we have a team actively meeting with local people, amenity groups and businesses to discuss how we can ensure that this development delivers real social value to local communities for the long-term and reflects the best of the area.”

To view the plans, visit: https://ayleshamcentreconsultation.co.uk/proposal/

Southwark NewsNewsAylesham Centre redevelopment: Businesses and residents petition developer to take plans back to drawing board