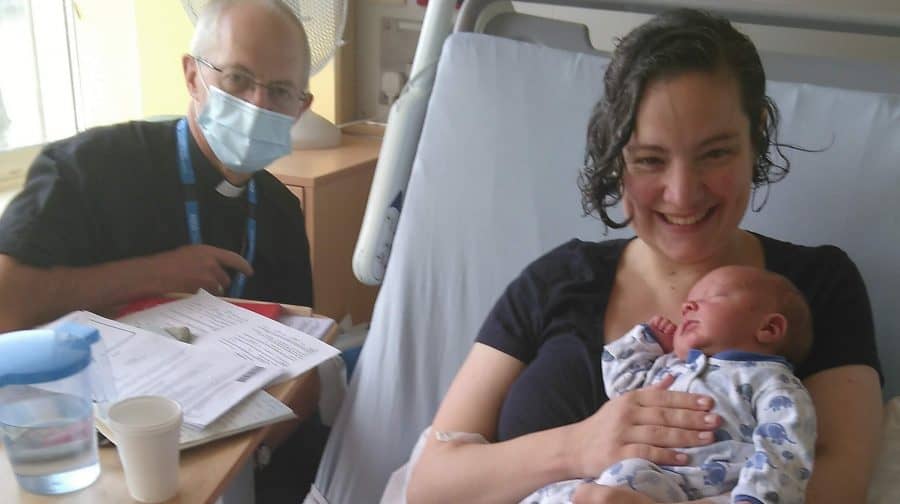 Ellen, pictured with baby Alexander and the Archbishop

A baby boy from Walworth has been blessed by the Archbishop of Canterbury after his mother was unwell following his birth.

Ellen Eames, 38, had dangerously high blood pressure at the end of her pregnancy with baby Alexander at the end of last month and was admitted to St Thomas’.

Following the birth, Ellen needed to stay in hospital to get her blood pressure down. Her husband Ken also had to go home after the birth because of coronavirus.

“Luckily my recovery from the birth was fine but emotionally it was a very hard week for me and for Ken, who was spending his first week as a father at home by himself and wasn’t allowed to visit us,” said Ellen, who is herself a vicar.

Because the family did not know how long it would be before their baby could get to church, where he would be blessed, Ellen asked if her little boy could be blessed in the hospital instead.

“In normal circumstances we would have asked a priest to bless Alexander on his first visit to church but I didn’t know how long it would be until churches would re-open,” she said.

“I also didn’t know when I’d next be near another priest. There is something very important about being ministered to by someone else.” The family, Ellen, Ken and baby Alexander, live in Walworth

After arranging the blessing with the hospital team, Ellen was shocked to discover it would be none other than the Archbishop of Canterbury Justin Welby performing the ceremony.

He has been volunteering with the hospital’s chaplaincy team during the pandemic, and little Alexander was his first chaplaincy visit.

Ellen said: “It made it extra special to have such an important visitor. I’d never met the Archbishop before even though I’m a priest in the Church of England, of which he’s the spiritual leader.

“It meant a lot to me that my baby could receive a blessing, especially at a challenging time.

“It was comforting to be reminded of God’s blessing and that Alexander is part of God’s story, despite being in hospital and in the middle of a difficult time for everyone.”

Shortly after the Archbishop visited on Easter Sunday, Ellen and Alexander were allowed back home.

While the family have not been able to introduce their new-born to anyone else, Ellen says it is wonderful to be back home.

“Since then, even though we haven’t been able to introduce Alexander to any relatives, it’s been wonderful to be home together just the three of us,” she said.