Back of shops has become a ‘dumping ground’ for rubbish 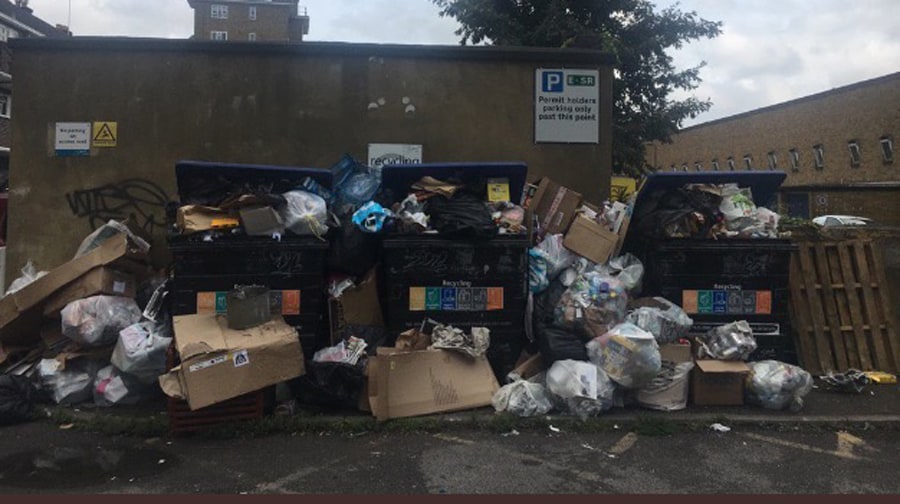 A Borough café owner has described the road behind his business as a ‘dumping ground’ after returning from a break to find a mountain of rubbish, writes Emma Snaith…

A heap of black bags were left overflowing out of bins at a recycling point behind a row of businesses on Great Suffolk Street.

Austin Yardley, who owns Terry’s Café, posted the image on twitter to highlight the incredible amount rubbish that has been left to pile up. He said: “We shut the café on the 18th August and came back to all this rubbish piled up.

It doesn’t reflect very well on the businesses along Great Suffolk Street, there are multiple catering businesses and all the rubbish attracts rodents and vermin.”

The café owner said that the pile up of rubbish was a regular occurrence and the result of people incorrectly disposing of their waste at the recycling point. He brandished the site as a “dumping ground for domestic rubbish”.

Cllr Ian Wingfield, Southwark Council’s Cabinet Member for Environment and the Public Realm, said: “This is clearly unacceptable, however we have cleared the area and will be monitoring the situation going forward.”

Café owner Austin said that they were pleased with the swift response of the council to his complaint. He recommends that the council take action to prevent people dumping rubbish irresponsibly and to consider moving the bins to another site.

Southwark NewsNewsBack of shops has become a ‘dumping ground’ for rubbish