Back to reality: life returns to normal on Bermondsey’s World Cup estate

'It’s been an amazing whirlwind really; none of us expected what happened to happen but we just embraced it and enjoyed every single moment of it' 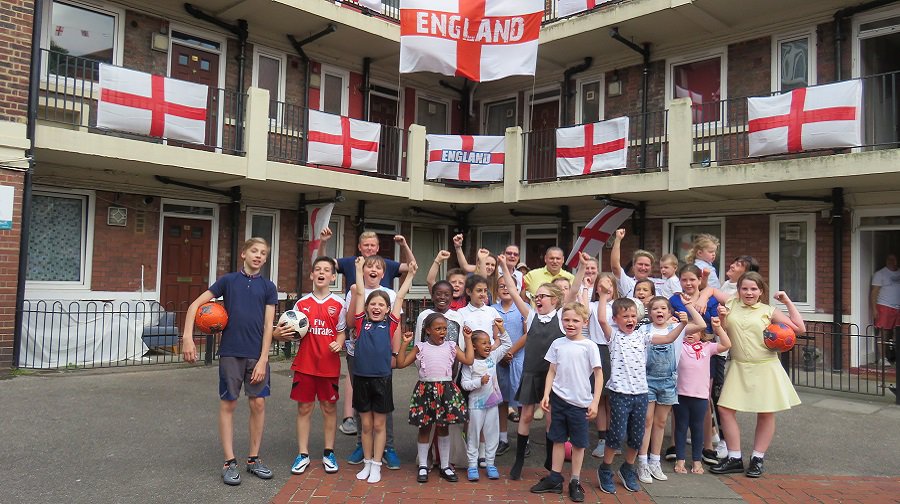 The England flags have been taken down, the TV crews have packed up their cameras and left, and life has returned to normal on Bermondsey’s World Cup estate.

It’s back to reality for Kirby Estate, which was unrecognisable just a week ago when it was still teeming with journalists and football fans.

The estate, which is covered in England flags every year for St George’s Day as well as for the Euros and World Cup, captured the nation’s attention after images of it decked out in 300 red and white St George’s flags went viral at the beginning of the World Cup tournament.

Chris Dowse, one of the organisers of the spectacle, said the flags were taken down after the final between France and Croatia last Sunday and it’s now business as usual on the Kirby.

“It’s just mundane now, it just looks back to how it was before,” said the 39-year-old, who lives on the estate off Southwark Park Road with his wife and two children.

“It’s been very quiet around here since – even up until the final we still had people coming round taking photos. It’s back to reality now.” Residents Geraldine Howard, 52, and Alan Putman, 48, who also helped organise the flags, admitted they were a “little bit overwhelmed” by the experience – which even saw them come face to face with members of the England squad during a video call.

Chris said the estate was proud of England getting to the semi-final of this year’s tournament and that it had been an “amazing whirlwind”.

“We were really proud because no one expected England to get that far,” said Chris.

“It’s been an amazing whirlwind really; none of us expected what happened to happen but we just embraced it and enjoyed every single moment of it from putting the flags up to doing all the social media and having the press attention and speaking to the England team.

“No one is going to top that from a small council estate.”

Anyone who missed out on seeing the estate covered in hundreds of England flags will now have to wait until next year when they do it all again for St George’s Day on April 23.