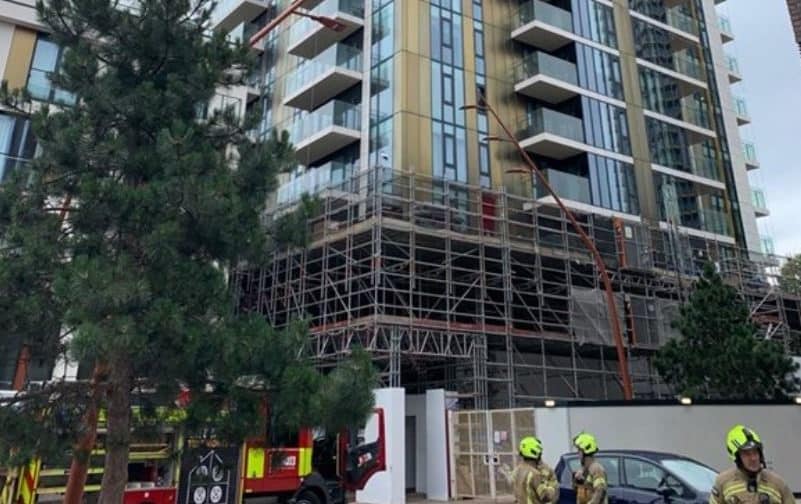 Firefighters at the scene this morning

London Fire Brigade issued a warning about the danger of cluttered balconies after a fire broke out in an Elephant and Castle tower block this morning.

The fire was in a flat on the 21st floor of the distinctive 35-storey tower on St Gabriel Walk.

There have been no reports of any injuries and damage was restricted to part of the flat’s outside balcony.

Around 200 residents had left the building before the brigade arrived.

Firefighters were called at around 10.15am and the fire was under control an hour later.

Five fire engines and around 35 firefighters from Lambeth, Old Kent Road, Dowgate and Dockhead fire stations were at the scene.

The cause of the fire is still being investigated, but London Fire Brigade warned its efforts had been hampered by clutter.

Elephant and Castle blaze caused by ‘electrical fault in car’

Station commander Jon Singleton said: “There were a lot of items stored on the balcony which contributed to the severity of the blaze.

“Fortunately, the swift action and hard work of crews prevented the fire from spreading inside the property.

“There is some safety advice you can follow to avoid balcony fires, including never storing combustible items on your balcony as they can catch light and contribute to fires spreading.

“We also advise that if you are smoking on your balcony, always ensure your cigarette is properly out and never throw it over the side as it could catch light to possessions on balconies below or next to yours.”

It comes a few weeks after a major electrical fire near Elephant and Castle station was put out by hundreds of firefighters.

Six hundred people had to be evacuated from nearby buildings.

Rotherhithe: good Samaritans stop to help man knocked out by e-scooter on pavement