The dogs' homeless owner sadly died after discharging himself from hospital 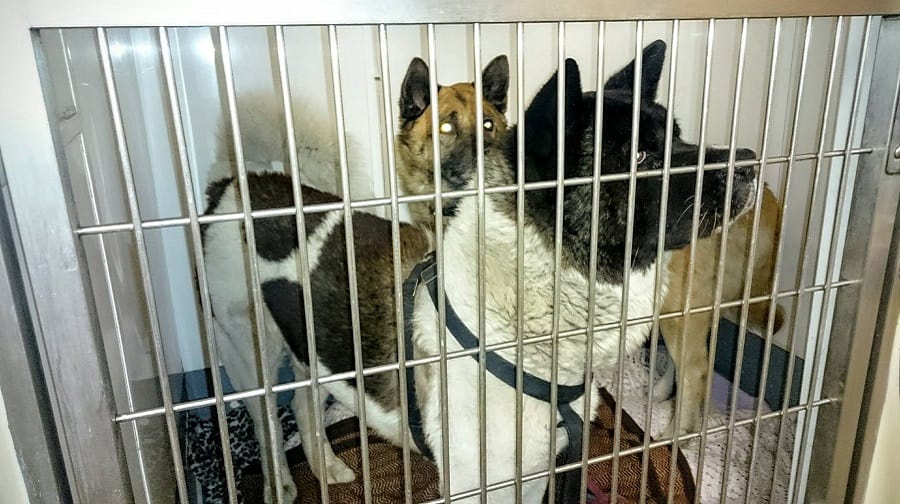 Rolex and Spike would have been put down if PC Peter Osborne hadn't found a rescue centre to take them in (Credit: Met Police)

A pair of dogs have been given a permanent home thanks to a policeman who promised to look after them before their homeless owner died.

On Monday, May 8, the Met Police posted on their Facebook page about Akitas Rolex and Spike, who faced being put down after their owner died of a drug overdose.

PC Peter Osborne, of Cathedrals safer neighbourhoods team, found their owner collapsed behind a doctor’s surgery in Southwark in the early hours of April 23.

The officer, along with others on scene, asked the man if he was able to get up, but he could not, so they helped him to stand and called an ambulance.

The man was distressed about leaving his dogs but PC Osborne insisted he needed to go to hospital and said he would make sure they were looked after.

Concerned for their wellbeing, the officer took Rolex and Spike to the RSPCA where they were given an emergency space.

He then called the hospital a few days later to check on their owner.

Sadly, the man had discharged himself from hospital and shortly after died from a drug overdose.

PC Osborne went out of his way to look for the man’s next of kin and contacted numerous animal charities and dog shelters in the hope of finding the dogs somewhere to live.

They were due to be moved to Southwark Council kennels this week where they would have been put down after seven days if they had not found a new home.

On Tuesday (May 9) police announced that PC Osborne had received five firm offers from recognised rescue centres offering the dogs a permanent home and ensuring they would not be put down.

New Hope Animal Rescue confirmed they would be giving Rolex and Spike a new home.

Once the dogs have been given full-time care, they will be available for adoption.

They are both male and about eight years old but not related.

They are described as healthy, friendly and well looked after despite living on the streets for a while.

PC Osborne is planning to visit them once they are settled.