Ray is appealing for gifts of clothing, sensory toys and toiletries which will be donated to the children later this month 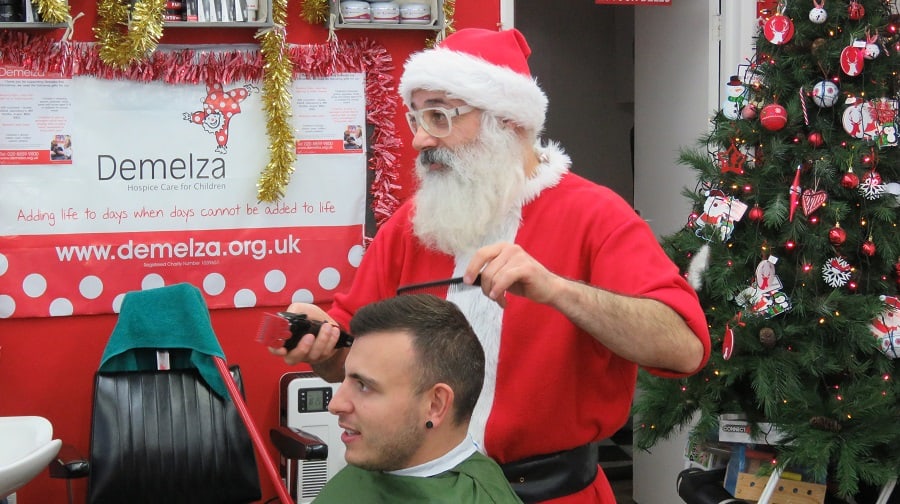 A barber is cutting customers’ hair dressed up as Father Christmas this month, in a bid to raise money for a children’s hospice, David Child writes.

Ray Hatoum, of FyneBlades hairstylists, is cutting hair in costume throughout December to raise awareness and support for children at the Demelza Hospice in Eltham. The hospice helps children from all over south east London, including Southwark.

He’s appealing for gifts of clothing, sensory toys and toiletries which will be donated to the children later this month. This is his second year as Santa – last year he gathered more than 300 presents for the Evelina Children’s Hospital, with even more are expected this Christmas.

The shop, on Evelyn Street, has been transformed into a winter wonderland for the campaign. Presents are already beginning to mount up under the Christmas tree.

Ray moved to the UK from  Lebanon 21 years ago and has worked in FyneBlades ever since. He’s seen how Christmas brings people in the community together despite their differences.

“People love to help at this time of year, especially when it’s for kids. I feel good about this, it doesn’t matter where we come from, or what we believe, helping is what matters,” he said.

Demelza are delighted with Ray’s efforts. Jenny Heritage, Community Fundraiser, said: “A huge thank you to Ray for his continued support. We are so grateful to those who choose to support Demelza, especially at this time of year. It makes such a difference to the children and families who we help across South East London and the work we do helping those who may not live a long life, to live a full life.”

Customers are very supportive of the effort, and are enjoying the novelty of such festive service. Alkan Shinasi, 30, said: “Ray’s got a really good reputation around here, everyone knows about what he’s doing and people want to help.”

Appreciation flows both ways – “I couldn’t do anything without my customers,” said Ray.

Demelza Hospices work to support more than 800 children and young people with life-threatening or life-limiting conditions and their families. They are based in Eltham, Kent and Sussex.