"The main message is that if something doesn’t feel right, contact the police." 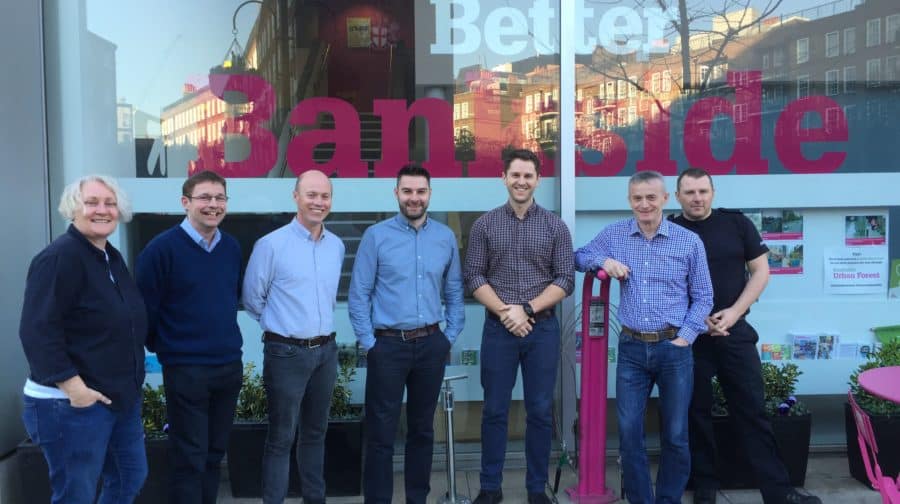 The officers pictured outside the Better Bankside community space, where they had their training

Southwark police officers are among those to receive special training to protect young children at risk of sexual exploitation in the night-time economy.

Eight Business Improvement District (BID) officers took part in the Nightwatch training, run by the children’s charity Barnardo’s, to try to tackle the under-reporting of the “extremely serious issue” of child sexual exploitation.

The officers can then deliver the training to businesses working at night, such as hotels or taxi drivers, so that staff can flag up the warning signs themselves.

PC Nick Morant, a BID officer at Team London Bridge, who attended the training, said: “We know child sexual exploitation is underreported, the training we deliver to hotels and businesses will ensure staff are alert to the issue and take positive action when there are signs of CSE.

“This could be the difference between someone coming to harm or receiving the help they need.”

Reanna Vernon, from Barnardo’s, said the training, which is in its second round, was a full day with role-plays and exercises designed to raise awareness and bust harmful myths about what victims of child sexual exploitation look and behave like.

“The main message is that if something doesn’t feel right, contact the police. However, [at the moment] not all businesses feel supported in doing that,” she said.

Frontline council officers, including housing officers, youth workers and community wardens have also taken part in the innovative training, in a bid to encourage more people to report child exploitation concerns to the police and local authority.

Cllr Evelyn Akoto, cabinet member for community safety and public health, said child sexual exploitation was an “extremely serious issue” which could have a “lifelong impact” on the victim.

“Everyone has a role to play when it comes to child protection,” she said. “We are so pleased to have Barnardo’s alongside us to work with our staff and other groups in Southwark.

“We want everyone to be able to confidently spot the signs of child exploitation and to report their concerns to the police and to the council.

She added it is “stop baldness” for night-time economy workers like taxi drivers and hotel staff are aware of the signs to look out for.

Further information about Barnardo’s Nightwatch training programme can be found by emailing tigerservices@barnardos.org.uk