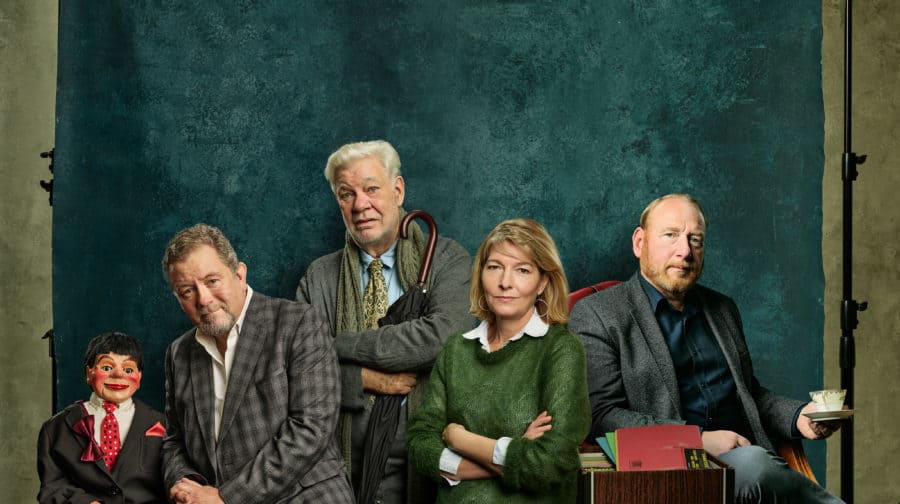 Peter Barnes was considered a giant of British theatre in the late 60s and early 70s, famed for his dramas that embraced tragedy, comedy and farce, but he was also known for smaller scale radio pieces. Barnes’ People was a series of short monologues broadcast in the 80s that have now been resurrected for stage by contemporary giants of the British theatre, writes Michael Holland.

In these four pieces you can find anger and compassion, dark humour and sadness, poignancy and wit, all performed with simple sets and green screen.

In Losing Myself, Adams (Matthew Kelly) sits in the cemetery that he visits almost daily to talk to the gravestone of a man he never knew about loneliness and the developers who want to build on the land, and also to seek redemption for what he sees as his past sins.

Rosa (Jemma Redgrave) reads out applications for residential care homes run by the council to an unseen panel; each application a tale of hardship and familial decline because one member becomes too difficult to care for at home. But Rosa, a doctor, is battling against a bureaucratic board and an underfunded NHS and knows that if these people go into care their lives will come to a sad end: ‘They sit in day rooms and count window panes…’ she pleads. Ultimately she is overwhelmed with the misery and corruption and hates her job. Rosa often seeks solace in drink.

There is a telling shot of Famous Old Grouse whiskey being poured into a Keep Calm and Carry On cup.

Adrian Scarborough plays Bray, a footman in Buckingham Palace in A True Born Englishman, who obviously likes to share his ‘conservative’ views with just about anyone who will listen, even though we find his gossipy titbits about those not from the right background are highly hypocritical when we hear his backstory.

But the gloriously bitchy comments from this gossipmonger are pure joy: ‘So seedy it was sprouting!’ Was just one gem that had me smiling. But it became obvious that this was a rather inconsequential man believing he was important when no one else did. The underlying narrative was, once again, the sadness of some people’s lives. ‘Drinking is still the biggest occupational hazard of working at the Palace’, he reveals with a look that conveys a deep problem.

Mike Jennings (Jon Culshaw) performs his hackneyed ventriloquist turn to a crowd that have seen it all before in Billy And Me, and after the show, sitting amongst his wooden ‘friends’, he has a more meaningful conversation about his depression and how life has not been kind to him. But Billy, Aunt Agnes, Uncle O’Pat and The Major rally round to cheer him up and raise his spirits by getting Mike to focus on the good things that he has achieved. Mike sorts his problems out by sharing them with his nearest and dearest.

The Barnes’ People series is timeless. These problems that affect all of us at one time or another do not change, so seeing these radio monologues brought to life again on stage do not seem dated.

Barnes’ People holds a mirror up to many people’s lives, and that makes it good theatre. Shy away from it if you will, but I suggest you venture in.

Philip Franks (Director of Rosa, Losing Myself & A True Born Englishman) says, “Peter Barnes’ monologues have all the qualities of his plays— all the passion, wit, anger and compassion- condensed into urgent 20 minute plays. They feel like they could have been written yesterday.”

After watching them all I was truly moved.

Supporter Package – £40 (programme and credit on the final films)