Barry Coker, who helped set up the Lambeth and Southwark Diabetes Support Group, awarded for eight years of service

A Dulwich resident has received an award from leading charity, Diabetes UK. 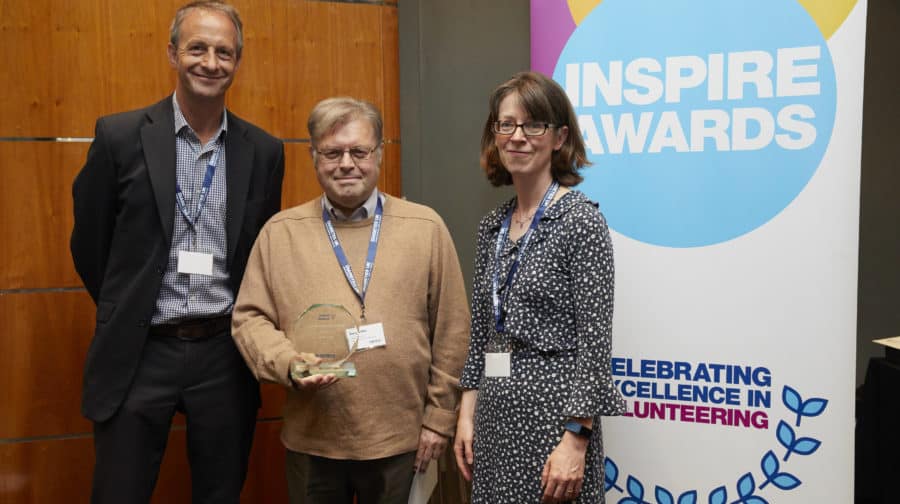 The volunteer chair of a support group for diabetes patients in Southwark has been awarded for his work helping others with their diagnosis, writes Hillary Chaisson…

Barry Coker, volunteer for Lambeth & Southwark diabetes support group, was presented with the Make a Difference award, which aims to recognise and celebrate outstanding individuals as well as group volunteer efforts

After receiving the award, Barry said: “I am delighted and surprised to receive this award.

“It has been  very rewarding to work with people who have diabetes, and I am pleased that the local support group  reflects the diversity of the two boroughs that we serve.”

Roz Rosenblatt, the head of London at Diabetes UK believes that the award given to Barry was well deserved, and said: “Barry has been a pillar of strength for many years.

“He is and experienced and committed chair of the group. He supports people living with diabetes in a proactive and constructive way.”

Barry has held this role for eight years. However, for him, volunteering for Diabetes UK started out as a personal journey.

“Until 2011 I had not had any involvement with Diabetes UK or the NHS other than as a patient” Barry said.

“My diabetes practice nurse suggested I might like to join a Charity run project to improve diabetes care across Lambeth and Southwark.

“I had naively assumed that as we had a National Health Service that all patients received similar levels of support and care.”

At the time, the leading diabetes project for the Lambeth and Southwark area was the Diabetes Modernisation Initiative (DMI), funded by the Guys and St. Thomas’ Charitable Trust which invested £4m to improve local diabetes services.

When the project closed, the level of care for diabetes patients across the two boroughs had improved but it was clear that there remained a lot still to do.

“I saw very quickly from the evidence and discussions with other patients that the ‘quality of care’ for diabetes patients varied greatly,” Barry said.

“It had never occurred to me that there could be such a wide variation and that the fact that I was getting a good service was purely by luck.

“So I helped set up the Lambeth and Southwark Diabetes Support Group.”

Since then, the support group has made significant strides towards raising the profile of Diabetes to ensure that people are aware of the risks of  developing Type II diabetes.

“This is particularly important across south London because, in addition to overweight people, individuals from the Afro-Caribbean and South Asia communities are more at risk,” Barry said.

“Providing advice and support to people is critical because as we say ‘You are not going to die of Diabetes you will die from not looking after your Diabetes’. You live with this illness 24/7 and only you can manage your illness on a continuous basis.”

The group runs a patient forum every other month at Inspire off of Walworth Road. This provides an opportunity for members to meet with a wide group of professionals to discuss relevent issues.

After eight years of service, Barry , is preparing to step down as chair of the group in the near future, and is working out how to pass the torch to someone that will ensure the continued success of the support group.

Neverthless, Barry is proud of the support group’s ability to “provide, through the patient forum, an opportunity, for local people to meet and discuss issues around diabetes and how it impacts on their lives.

“Diabetes can be a lonely medical condition and our members find it very easy to meet and discuss issues.”

To find out more about becoming a volunteer for Diabetes UK, or to join a local support group, please emailvolunteering@diabetes.org.uk or call 0345 123 2399.

Southwark NewsNewsBarry Coker, who helped set up the Lambeth and Southwark Diabetes Support Group, awarded for eight years of service