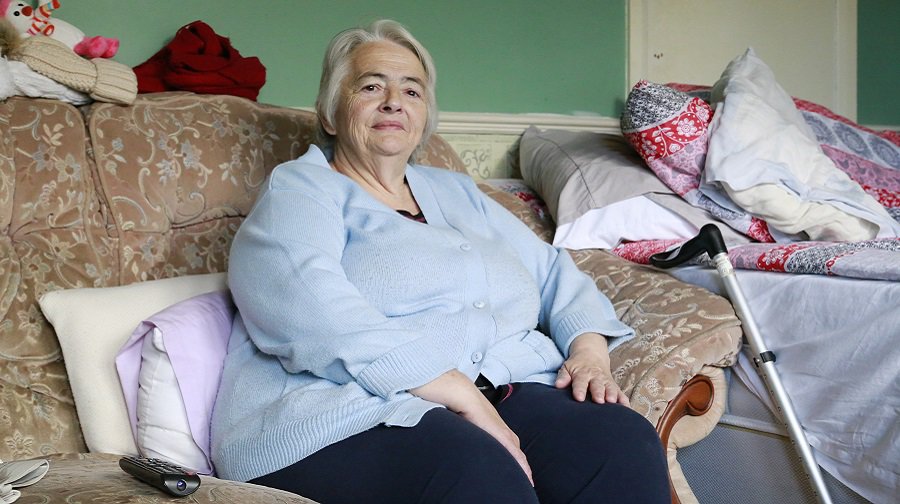 A cancer survivor says she has put up with a leak in her council flat on and off for 22 years – and now she’s had enough.

Frances Stoatt, 66, says her downstairs toilet is now unusable because of a leak coming down into her two-floor flat in Marden Square, Bermondsey.

The downstairs toilet in her flat is frequently flooded and the water leaks into cupboards containing electrics in her flat, she claims.

The great-grandmother, who has lived on the estate for 31 years, said she had reported the leak to the council on numerous occasions but it had never been fixed.

“The stack pipe in my bathroom floods me out on and off,” said Ms Stoatt, who was diagnosed with lymphoma cancer on her right lung and later suffered a cardiac arrest in November 2015.

“The last time the council came out and put a camera down the pipe was in 2012. Now they won’t come out.

“We went for arbitration in February 2016 and we’ve continued to be flooded. Unless it fills my buckets up within ten seconds they [the council] won’t come out.

“I’ve already had the bathroom and toilet decorated twice.

“My downstairs toilet is out of use. The bathroom is completely soaking wet and it’s now dripping into the cupboard on the outside landing which contains the telephone wires and the other side in my kitchen is where the electrics are.”

Ms Stoatt said the damp from the leak had affected her next-door neighbour’s bedroom and caused the wallpaper in the room to fall down. “It’s absolutely horrendous,” she said.

Cllr Stephanie Cryan, Southwark Council’s cabinet member for housing, said the latest leak in Ms Stoatt’s flat was a separate issue to previous leaks and that the council had contacted the leaseholders of the property above to fix the problem.

“I am sorry to hear that there is another leak reported at Ms Stoatt’s property and I can assure her that housing officers will do everything they can to find a solution quickly,” she said in a statement.

“There have been historical issues with leaks in this flat and delays to repairs due to the various problems accessing them, and I can appreciate how frustrating it must be to find another one.

“We have confirmed this is a different issue to the previous leak as it is coming from the properties above, which are owned by leaseholders.

“Our team is speaking to the leaseholders to get access and fix the problem as soon as possible and we can only ask Ms Stoatt to bear with us and apologise again for any inconvenience caused.”

Just move this lady out,she does not need the stress.give her a ground floor property when available…Southwark council is a joke..she has fought for these repairs…move her to a decent dwelling.Deal with the problem,then move someone else in..

Yup. This sounds like southwark alright. Useless the whole lot of them.

Southwark NewsNews‘My bathroom’s had a leak for 22 years’