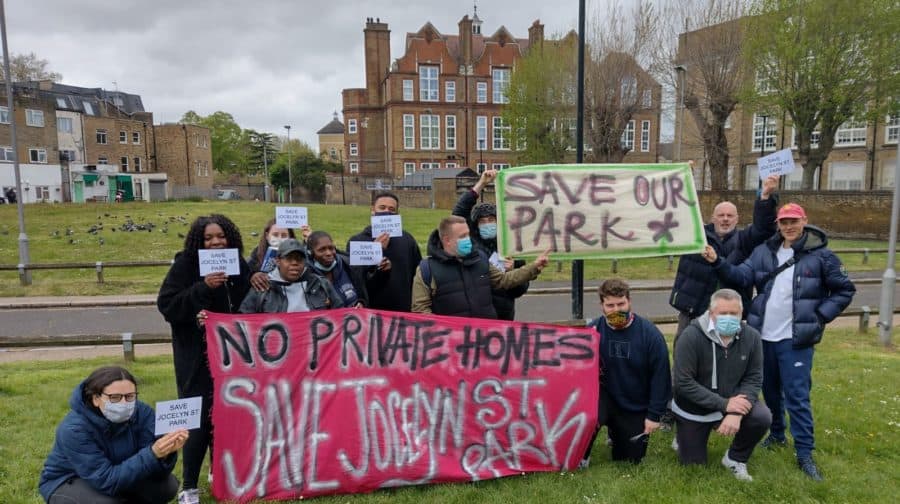 Protesters gathered in Peckham on Saturday to show their opposition to the loss of local green space from a planned council development.

Southwark Council has planning permission to build 168 new homes on the “Flaxyard site” between Sumner Avenue, Jocelyn Street and Melon Road, just to the north of Peckham Road. Some 96 of these would be for social rent, with another 24 put up for shared ownership. The tenure of the other 48 is unclear from planning documents, but they could be for private sale or rented at market rates.

The development includes three new buildings, which will go on the green space. Two would be between four and six storeys high and another would have four floors. A fourth building will be converted from offices into flats. There will also be space for shops, restaurants and pubs in the development.

The people who gathered on the grassy area slated for building on Saturday, May 7, said they were worried about losing the green space that has been so important to them in lockdown.

Gabriel Monade, who has lived in a nearby estate for about 20 years, said: “When you go from having a green space outside your door for years to then having a six-storey building in front of your window, that’s a really big change… this is the start of something, we’re getting more people involved.”

Another member of the group added: “This is one of the most egregious examples of Southwark’s contempt for its residents and nature. Peckham is losing a massive open space for what?… We will save this park.”

The council has promised to build 11,000 socially rented homes by 2043 in a bid to tackle the housing crisis in the borough. Some 13,000 households are waiting for affordable housing in the borough and 3,300 are in temporary accommodation

Permission for the new Peckham development was originally granted in March 2018 and subsequent minor changes to plans have been approved in the years since then. Building work is due to begin in August this year.

Councillor Stephanie Cryan, cabinet member for council housing, said: “Southwark Council will be developing 100% affordable housing on the Flaxyard site to provide essential new council homes for our residents. We will be constructing four buildings to deliver 120 much-needed homes (of which 96 will be council homes for social rent and 24 homes for shared ownership).

“One of the blocks will house a ground floor commercial unit, and we could provide a new shop along Peckham High Street. We will also be building a new children’s play area.

“We have worked closely with residents and stakeholders in the area to create the designs and we are confident that the development will enhance the surrounding area as well as providing high-quality new council homes for local people. The works are due to start in early August 2021.”

People that are protesting they probably have home and not thinking about people ain’t got a home or waiting ,in my eyes any building being build for social housing is welcome, because in southwark we do need the housing a lot ,so that we can get the waiting list down .

Perhaps if Southwark were so keen on social housing they wouldn’t have torn down the heygate and Aylesbury estates and flogged the land to private developers to build non affordable housing.

One of the problems with larger local authorities such as Southwark that are really amalgamation s of what were very successful town councils like Bermondsey and Peckham, is divide and rule politics. Hence the mega redevelopment of Rotherhithe and Surrey Quays in a HEAVY HANDED PURELY COMMERCIAL “SMASH AND GRAB” way resulting in densities and ugly buy-to-let investors buildings undreamt of in the early days of the LDDC was aproved by councillors and representatives in other areas of Southwark precisely because a proportion of the CIL was spent in those parts of the Southwark unscathed. Therefore the good people of Peckham’s Councillors approved the privatisation of open public spaces previously protected by law by the LDDC (thinking of the riverside space where the Red Scotch Derrick crane once stood as a the lasting memorial of the Surrey Commercial Docks) which entailed getting Boris Johnson to lift the public space protected covenant. A case of Johnson as Mayor, the GLA (who also benefited financially from the sale of public land) and Southwark Council working closely together AGAINST the long term interests of residents. Having “eaten up everything that could be turned into kopecks in Surrey Quays and Bankside along the River, Mark Williams (if Camberwell) has now turned his and the Planning Department ‘s attention towards Peckham. There is another disastrous SLUM OF TOMORROW like the Elephant and Castle waiting to happen in what was once a low rise open space.

Unfortunately, when I raised a campain to Save the Red Crane it failed due to the considerable apathy that Local Authorities have developed and encouraged over the years to get their way, largely in the parts of the Borough furthest .away from the Town Hall in Peckham. It is also true to say that nobody in Peckham took the slightest interest in my campaign, developments outside their town council area or the highly commercialistic building going on elsewhere.

Now it’s happened on YOUR DOORSTEP!

(what was going on in the rest of Southwark and across the country where public open spaces previously protected by law are being lost at a rate of hundreds a year…. forever)