Battle to save SE5 industry could affect regeneration across Southwark

'London still needs industrial sites quite centrally, and a range of employment space. We need to balance this with the need for new homes' 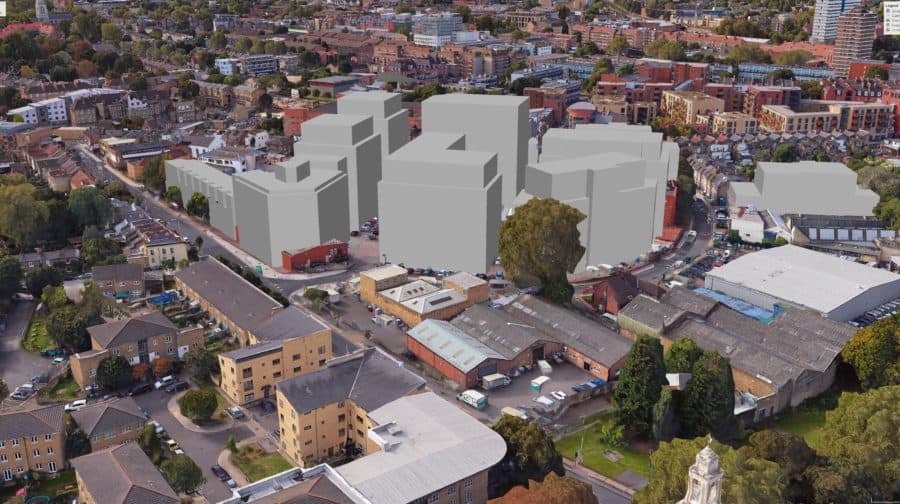 An impression of how the high-rise blocks will look

A decision on the future of Burgess Business Park could have huge ramifications on high-rise, car-free regeneration schemes across Southwark and the borough’s last remaining industrial sites.

Southwark Council’s planning committee rejected developer Peachtree’s application for the new ‘Camberwell Union’ neighbourhood on the site of Burgess Business Park in November 2018, in line with widespread opposition by residents.

The scheme in its current form includes 499 homes across thirteen blocks of up to 12 storeys high.

The developer has now appealed, and an inquiry into the decision will be held by the Planning Inspectorate in late August.

Unusually, local groups have been invited to give evidence, including testimonies that go beyond the council’s own rationale for refusing the scheme.

Jonathan Welch, from Southwark Law Centre, says the eventual decision could be a watershed moment for regeneration in the borough.

It is hoped if the Secretary of State for Housing, Communities and Local Government rules in the campaigners’ favour, this could set a precedent and help save threatened industrial land under keep housing low-rise and, and make sure communities are ‘liveable’.

“It is a bit of a test case,” Mr Welch from Southwark Law Centre, told the News: “When developers are cramming in new dwellings into these schemes, there is a trade-off between the benefit of having a higher number of new homes, and the experience of the existing residents and those who will live in them.

“When they are designated as ‘mixed use’, this also has a cost.

“London still needs industrial sites quite centrally, and a range of employment space. We need to balance this with the need for new homes.

“With this inquiry, the secretary of state will effectively make a judgement call on that balance.”

Burgess Business Park is the largest designated industrial site outside the Old Kent Road opportunity area, but the new scheme would see yard space lost, meaning no businesses that can large deliveries – one reason for the original rejection.

Key to campaigners’ concerns are the number, and density, of multi-storey housing planned for an area without adequate transport links and community services that would see more than a thousand new residents.

The area is already lacking enough GP surgeries and other amenities within walking distance, and is served by two very busy bus routes (136 and 343) and no overground.

A coalition of groups opposing the scheme in its current form are crowdfunding to pay for a barrister to represent them at the hearing, with more than £5,000 pledged already.

Many residents welcome development – and new housing – but are worried about how the numbers will work, especially in car-free developments similar to the Canada Water masterplan.

“The Bakerloo line extension is not relevant in this area, and transport links haven’t improved,” says Welch.

“Car-free developments can’t be built at such a high density here – the roads aren’t wide enough for more bus routes.”

Although the developer did revise some aspects of the plans, including reducing the height of one building from 14 to 12 storeys, this hasn’t reduced the overall number of homes.

Peachtree Services was contacted by the News before going to press, but did not respond.

More luxury homes for money launderers and pushing up the prices for local people . You just cant win with Southwark Council …they are just sell to nay private developer destroying social housing and local communities

Southwark NewsNewsBattle to save SE5 industry could affect regeneration across Southwark