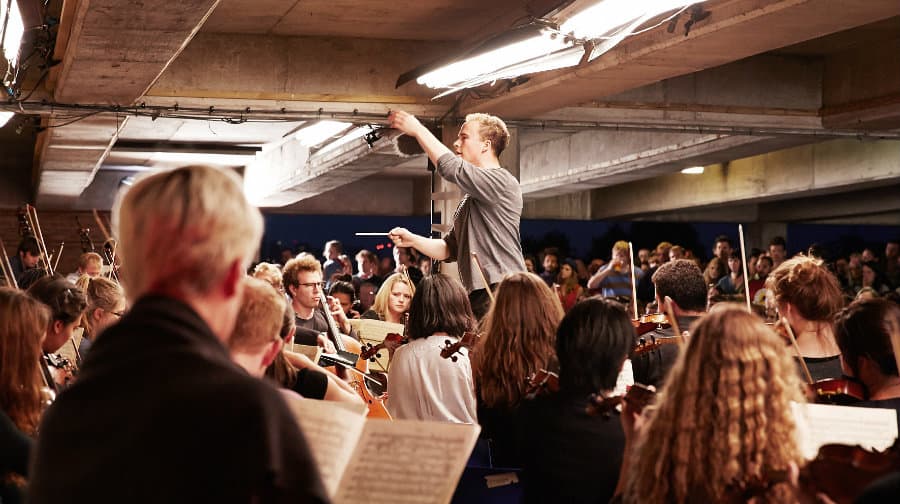 Christopher Stark performing at the multi-storey car park in 2015. Photo by Ambra Vernuccio

Peckham’s multi-storey car park will play host to its first classical music performance with the BBC Proms, this Saturday.

Pieces composed by Steve Reich will be recreated by Hannah Grayson and the Multi-Storey Orchestra at 12pm and 3pm.

The second concert, featuring the same performances, will be broadcast live on BBC Radio 3.

Kate Whitley of Multi-Story, which has promoted events at Bold Tendencies for five years, told the News: “The first piece of Reich’s music they play will be a solo performances by Hannah of First Vermont Counter Piece. The second they will play is called Eight Lines, and features thirteen players, and the third piece, Music for A Large Ensemble, will have a 30-piece orchestra.”

An audience of 600 will gather at the car park’s Level Seven, and the three pieces will be conducted by Christoph Stark. Though usually staged at the Royal Albert Hall, this year’s Proms will see other venues like the Camden Roundhouse included in the programme for the first time. “It’s really exciting for us that’s it’s going to be on the radio,” Kate said. “We really love Reich, it’s amazing music and it will work particularly will in this space. His music is very repetitive and slowly evolves slowly and becomes very atmospheric and meditative.”