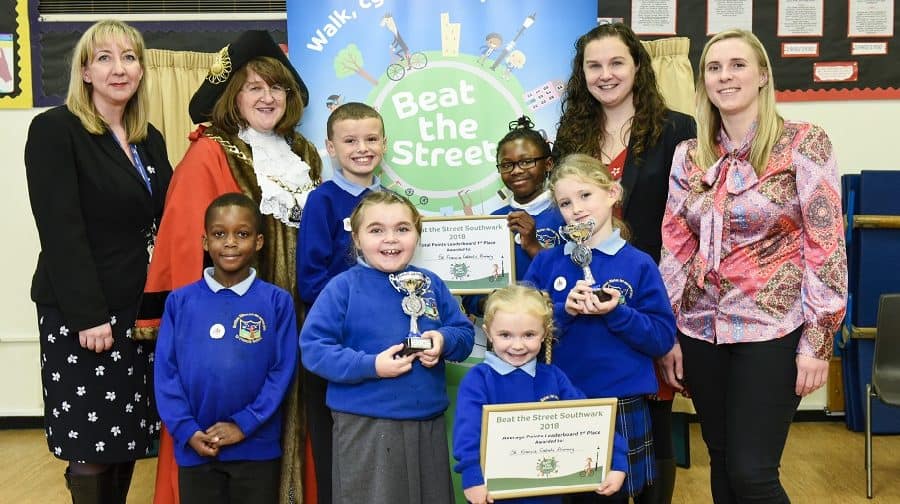 St Francis Catholic Primary School in Peckham topped the leader board for the inaugural Beat the Street competition, which saw the people of Southwark complete nearly 40 thousand miles of outdoor exercise in under two months.

From September to November, Beat Boxes were placed across Southwark in Peckham, Old Kent Road, Faraday and North Walworth where players could tap their key fobs to win points in a competition aimed at getting children and adults to do more exercise.

Students at St Francis were both leaders in the total number of points earned and the average score per pupil.

Claire Gillespie, deputy, head teacher at St Francis, said: “Winning Beat the Street has been fantastic. The children, their families and even staff were so enthusiastic about tapping the beat boxes throughout the competition – it’s a shame that it has now come to an end.

“Our families loved attending the various events in local parks and were very eager to tap when double points were up for grabs.

“We are trying hard to encourage the children to walk to school, and this initiative definitely gave them the incentive.

“Looking at the children’s results it’s great to see how many miles they’ve walked. One child in our school scored 10,830 points and came first in Southwark.

“This has been a brilliant experience for us as a school. We look forward to playing again in the future.”

They reached first place with an incredible 148,855 points in total, and were awarded £300 of Decathlon vouchers to spend on sports and fitness equipment as their prize, with runners up were Walworth schools Michael Faraday and English Martyrs  getting £200 and £100 vouchers. Students from Highshore School given their prize by Cllr Catherine Rose, Mayor of Southwark

Highshore School, Peckham,  for children with special educational needs achieved impressive results, as its average score per pupil was the second highest out of all schools that took part, with an average of 269 points, covering more than 900 miles in total within six weeks.

In the community group league, Silverfit beat Good Together, Bedstars, and the Southwark Green Party with a total of 29,825 points and an average of 1,656 per person.

Beat the Street is one of the council’s many initiatives to get people more active in Southwark, a borough with high levels of childhood obesity and inactivity.

Two years ago, a report found that Southwark had the most overweight Year Six children of anywhere in the country.

Public health chiefs at the council are also gearing up for a new campaign – Fizz Free February – when residents are being challenged to give up unhealthy, sugary fizzy drinks to help lower people’s risk of developing type 2 diabetes and control their weight.