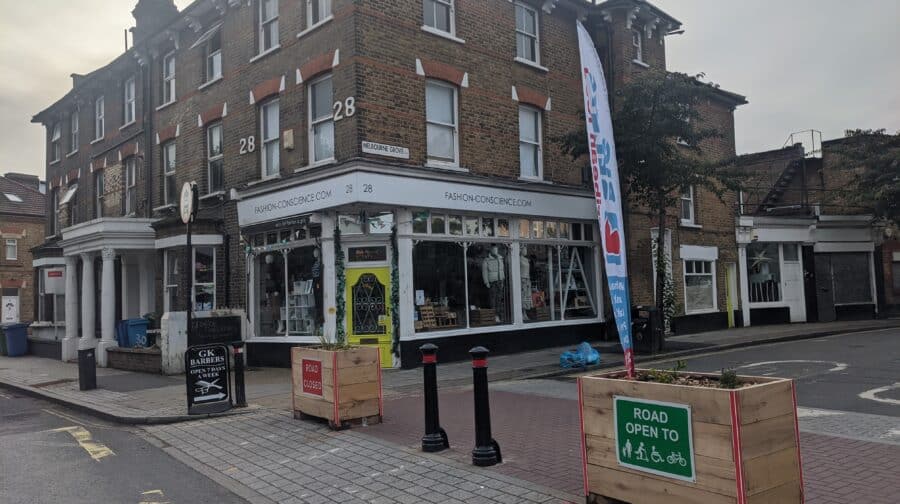 Thirteen traders in SE22’s Melbourne Grove are pleading with Southwark Council to reconsider the road closure they say could finish off their businesses and leave East Dulwich a ‘ghost town’.

Lianne Ludlow, the owner of Fashion Conscious, said she and many other businesses were not against reducing traffic and improving access for cyclists and pedestrians – but were shocked at how the scheme had been implemented and its timing.

She maintains the first she heard about Melbourne Grove being blocked off to traffic was when a letter, dated August 28, arrived at her shop days before the planters were installed in early September. East Dulwich’s Melbourne Grove at the corner of Tell Grove

“We had no notice prior to it happening and have since discovered that residents’ opinions were being gathered, meetings had taken place, door-knocking and flyers but none of us had been involved,”she said.

Lianne added that the lack of notice had left her and other traders faced with further loss of income just as they hoped to be getting back on an even footing and gearing up for a busy Christmas – when many companies make a significant proportion of their annual profits.

“To just put in planters and expect people’s behaviour to change without putting alternatives in place first is not positive change,” she argued.

“With things like the ULEZ we are going in the right direction with bringing air pollution down, but we need more bus routes, trams and cycling routes.

“We are asking why this has been done here, now, and how they are measuring its success.  We still do not have this baseline data.

“The low emission neighbourhood is a blunt instrument and we need to look at other ideas for reducing pollution, slowing the spread of COVID and improving road safety.” Congestion outside the ‘low emission’ zone

Lianne, a mother of two, is one of the traders on Melbourne Grove who was unable to pay her own wage during lockdown. All the government support went on rent.

Like others she has not had any rent reduction or a pause. She told the News she knew of one business that took just £30 last week.

Although the road block and neighbouring CPZ – the shops have also lost around a third of nearby parking spaces – are not the sole cause of their precarious situation, it is certainly not helping them recover.

Lianne says some days she now only makes a ‘handful’ of sales – but things were faring better for the two-and-a-half months before the scheme was put in place.

Matt Rowden, from GM’s hairdressers, is unequivocal when asked how the road closure has impacted his business; he says business is down by 45 per cent ‘at least’.

“Guests of the salon are talking with their feet, actually saying it’s taken an extra 40 minutes to do a journey that used to be just ten minutes,” he explained.

“Since coming back on July 4, for eight weeks our business grew each week at a comfortable rate and then, boom, the council closed the roads up and we’ve taken a severe hit.

“People are just avoiding the area as you do when you know there are a set of temp lights causing mayhem. East Dulwich will be a ghost town before long.”

He says he feels like traders are being used as ‘guinea pigs’ as the council tests its air pollution measures, saying: “We personally as a business cannot go on longer than Christmas under this pressure. Losing £1,000 to £2,000 per week is not sustainable.” The salon is one of the businesses unlikely to see its client base keen to cycle or wait for a bus in the rain after their appointments. They also depend on arriving on time – an added issue when trying to ensure smooth movement of customers through a socially distanced shop.

This is an added challenge Yeliz Dibi, from Peckham, is all too familiar with. The manager of HB Therapy, which offers services including beauty appointments and massage, says clients are arriving late, overlapping with others and telling her they can’t get public transport due to mobility issues, but are worried about using public transport as infections rise again.

“Right now we are struggling to make any income,” she said on Tuesday. “We don’t even break even sometimes. New Year is make or break for us – or sooner if there is a second lockdown.”

She also paid full rent during the months when forced to stay shut and saw her team cut from nine to five employees. Despite all this, and having to buy expensive PPE,  she has not put prices up because ‘everyone is in the same boat’. The team from HB Therapy

“I didn’t think it would be this hard reopening – because we are really struggling. I am just not sure we can survive.

“I didn’t get any letters about the road closing, but I get that some people want it closed and why.

“One of the worst things about it is that it has left the community divided.

“I’d ask the council to reopen straight away, but if they aren’t going to do that at the very least come up with ideas for how we can get more customers in and mitigate the impact.

“Right now we are the ones bringing ideas to the table, like setting up a market to bring more people in, and they’re saying things will take time and the road closures will bed in.

This paper asked Southwark Council to respond to claims Melbourne Grove businesses were left in the dark about the low emission neighbourhood, and asked whether it was reconsidering how the scheme had been implemented.

“Both myself, Cllr Burgess and ward councillors have met with the traders and are very sympathetic to the issues they have raised, we are reviewing the impact of the traffic reducing measures on their businesses and looking at what mitigations can be put in place.

“I want to see a long term, sustainable reduction in cars and low traffic neighbourhoods are one of a variety of potentially impactful ways of achieving low traffic Southwark.

“It’s important to encourage active travel to our high streets and we’ll also be working with traders to see what we can do to increase cycle parking in the Grove Vale and Melbourne Grove area.”

Its the middle classes pulling around the wagons and pushing up their house prices . If they want their streets closed then dont let them own cars . Why should they be allowed to stop the city working ,particularly when they all have back gardens to sit outside , and then be allowed to pollute everyone else’s streets . Selfish selfish people and nothing to do with pollution

I’m middle class, but don’t own a car and don’t have a back garden. I want the streets to be safe and clean for everyone, not clogged up with cars benefiting only those who use them (frequently for short journeys that would be quicker on foot or by bike). East Dulwich is a traffic jam much of the time: the problem is not temporary traffic lights or LTNs, it’s too many people making unnecessary car journeys. If you’re not willing to walk, cycle or get a bus because you’ve just been to the hairdresser, you need to think hard about your priorities.