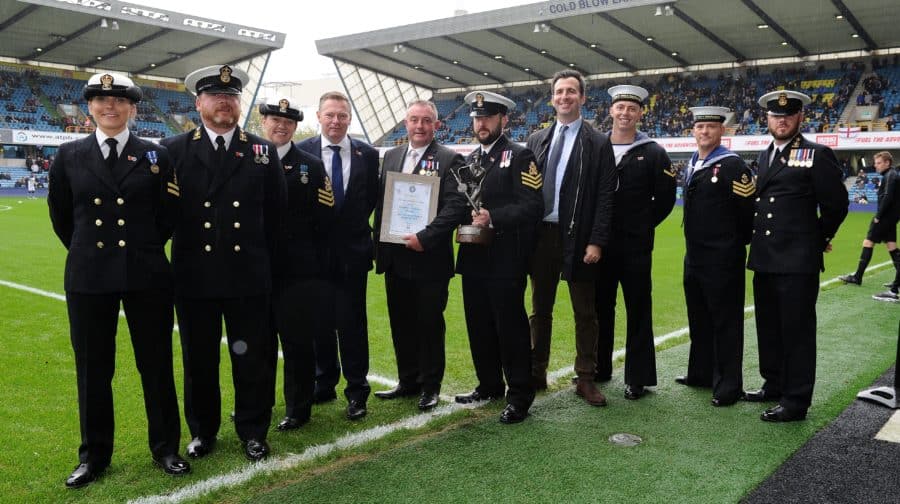 The Royal Navy team commemorating Albert at The Den

A Royal Navy team have commemorated a Bermondsey WW1 hero at Millwall’s ground.

The Close Range Training Section also attended a commemoration event to Albert McKenzie VC at his memorial off Tower Bridge Road on Friday.

The memorial, unveiled in 2015, pays tribute to the Victoria Cross-winning hero, who helped lead a raid to recapture the Belgian port of Zeebrugge in WW1.

His bravery, despite being severely wounded under heavy fire, helped ensure the success of the mission.

McKenzie – born in 1898 and known to be a Millwall FC fan – joined the Royal Navy as an Able Seaman when war broke out. After his courageous actions, a ballot was held by sailors of HMS Vindictive and HMS Daffodil, the first time this had happened, to choose Albert to receive the VC medal.

On 31st July 1918, he went in full uniform and on crutches to Buckingham Palace, accompanied by his mother and sister, to receive his VC from King George V.

Alongside laying wreaths at the memorial for Albert, the team from HMS Collingwood also took part in a service at The Den with an award ceremony before the game against Stoke City.

“It is always an honour to be part of this affiliation which takes place annually and I have met some amazing people from Bermondsey and from Millwall FC,” said Nige Newport, Close Range Training Instructor.

“We have established such a good relationship with them which we, Millwall FC and the Royal British Legion Poppy appeal will endeavour to keep going for the future.”