Bermondsey: ‘All or nothing’ fundraising drive for Cornerstone community art project on Whites Grounds Estate 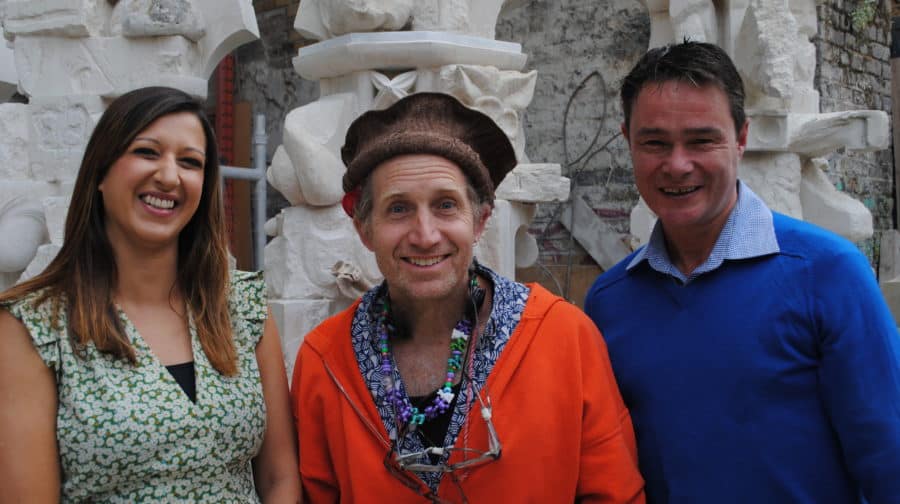 A stonemason has undertaken a £89,000 all-or-nothing fundraising drive to install a 20-tonne piece of collaborative artwork on Bermondsey’s Whites Grounds estate.

The project, ‘The Cornerstone’, would see a striking sculpture being installed on the corner of Whites Grounds and Bermondsey Street – which weighs approximately the same as three woolly mammoths.

Pieces of the artwork have been hand carved by residents of the estate under artist’s Austin Emery’s guidance, following on from a previous successful sculpture called the ‘The Shared’ unveiled on nearby Tyers Estate in 2014.

Bricks used in the community-constructed sculpture also come from locations nearby, including from London Bridge station, Southwark Cathedral and St Olaves. The 48-year-old artist, who has lived on the estate over a decade, told the News: “To get it finished and on the ground, that’s why we need the money. It’s an all-or-nothing campaign.

“To say blood, sweat and tears have gone into this project would be an understatement!”

He added that he was “excited” by the community project, saying it had “engaged hundreds of people from all walks of life.”

To kick-start the fundraising drive, Southwark Council has pledged £7,500 for the artwork through its grant fund.

Cllr Rebecca Lury, who holds the culture portfolio on the town hall cabinet, said the Cornerstone was a “wonderful public collaboration” between estate residents and Mr Emery.

“I was fortunate in that I was able to see at first hand these huge pieces of stone, hand-carved by children and adult participants from the Whites Grounds Estate and areas around Bermondsey Street during open public workshops,” she said.

“Together this will form a living art heritage, connecting people across time, social and geographical boundaries.” An in progress shot of the artwork

Damian O’Brien, a councillor for London Bridge and West Bermondsey ward where the estate sits, has backed the artwork fundraiser.

“There are a number of people who have invested blood, sweat and tears into this project so it is great to see it all coming together,” he said.

“It is also a really good example of how the local community, working with their ward councillors, can provide lasting benefit to the community through CGS funding.”

167 people have backed the fundraising drive at the time of writing, with over £11,000 raised.

Those backing the project hope to secure a funding pledge for community betterment initatives from City Hall.

“I’m very confident that our exemplary project will attract a healthy pledge of match-funding support from the Mayor of London in the coming weeks,” said Austin.

“Following that, we will be in a great position to attract our final big backers to push this over the finish line and achieve our total fundraising by the close of our campaign.”

The funding would go towards the costs of constructing, assembling and embedding the structure into the area.

Mr Emery told the News that he hopes officially to unveil the sculpture in time for the 2020 Bermondsey Street Carnival, although it is due for completion before then.

Further details about the artwork and ways of donating to the community art project can be found here.

Southwark NewsNewsBermondsey: ‘All or nothing’ fundraising drive for Cornerstone community art project on Whites Grounds Estate