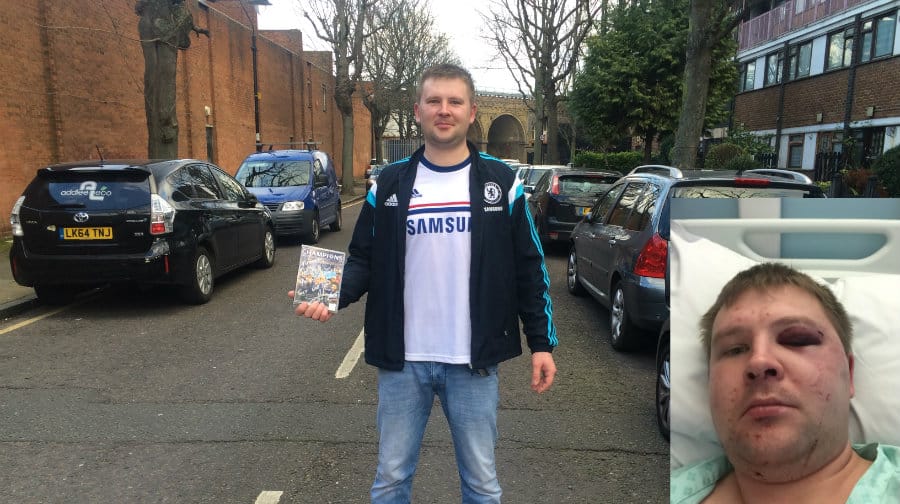 Vladimir with his new DVD at the scene of the attack

A Bermondsey man suffering from amnesia has received help in regaining his memory from an unexpected source: international football superstar Eden Hazard.

The Champions League winner sent Vladimir Howard, who suffered extensive memory loss when he was attacked in mysterious circumstances last November, a signed DVD after the News told his story last month.

The Belgium international and 2015 Premier League Player of the Year signed the case for the disc, which told the story of the club’s championship win last season, with a note: “Vladimir, to jog your memory! Get well soon.”

Vladimir, a die-hard Blues fan, told the News he “couldn’t believe” it when he received the package, soon after he appealed to readers for information regarding a brutal assault which left him in hospital with no memory of the previous year. He said: “The story went so far. I didn’t expect it. Papers in Russia, France, Belgium, Hungary all wrote about it – so many countries. I don’t know how it is possible.”

The 36-year-old, who was a carpenter but now cannot work due to damage to his hands sustained in the attack, said he has been trying to regain his memory by watching old Chelsea games online.

He said: “I watch games on YouTube, or Match of the Day. I have watched the DVD too which will help. Some people have asked me if there was a cheque attached to the DVD but unfortunately not!”

Vladimir is still appealing for information regarding his assault on November 7 last year.  He was attacked in Dockley Road sometime after 6am when he returned from an early shopping trip, suffering facial and hand injuries.

A police spokesperson confirmed they are investigating, adding that no one had yet been arrested with the incident.