Fergus Carr and Jane Radford, descendants of people who took part in the original ceremony, were at the service 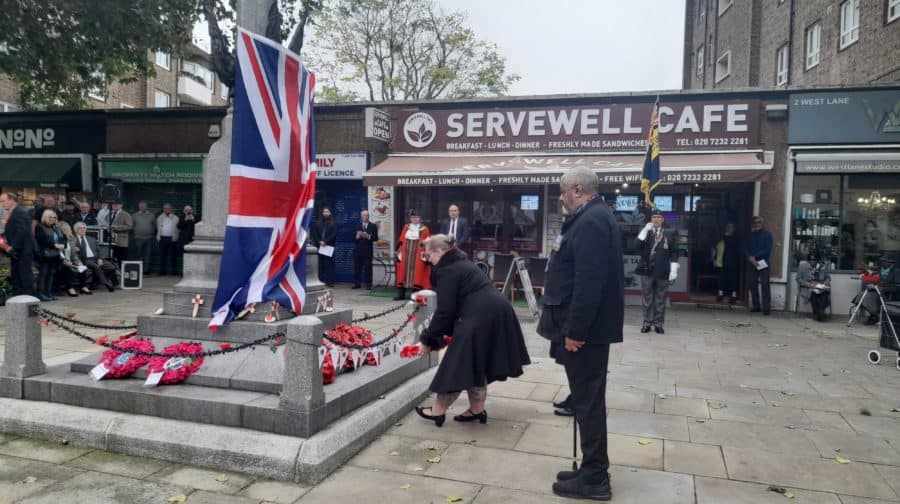 Jill Merrett from the local Poppy Appeal laying a wreath

About a hundred people defied a backdrop of busy traffic, sirens and other sounds of 21st century London to commemorate the hundredth anniversary of the Bermondsey and Rotherhithe war memorial on Friday afternoon (October 8).

The service, which took place around the West Lane memorial just off Jamaica Road, was led by Canon Gary Jenkins, the vicar of St James’ and St Anne’s and supported by Fergus Carr, the descendant of Arthur Carr, the former Peek Freans owner who helped set up the memorial in 1921.

Fergus, an architect who designed the recently unveiled joy slide in St James’ churchyard, told the congregation to protect the monument from desecration – a reference to the vandalism incident in August, whose after-effects can still be seen. 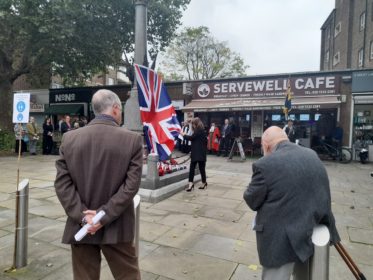 He added: “It is not an occasion on which to applaud or cheer. A ceremony of unveiling such a monument must be one of solemnity.”

The monument, which had a Union Jack hung over it, was unveiled again by Jane Radford. Jane is a descendant of Hetty Speer, whose sons died in the First World War and who performed the original unveiling.

An army veteran held up a Royal British Legion flag during the ceremony, other than during the two-minute silence, when he lowered it to the ground as is customary.

Several of the guests also laid wreaths at the monument as part of the service, including local MP Neil Coyle, his predecessor Sir Simon Hughes, Mayor of Southwark Cllr Barrie Hargrove and Jill Merrett, who runs the local branch of the Poppy Appeal. The service ended with the national anthem.

The monument made of polished Aberdeen granite, is topped by a ball and flame. The ball symbolises the world and the flame represents the eternal life of people who died in the wars.