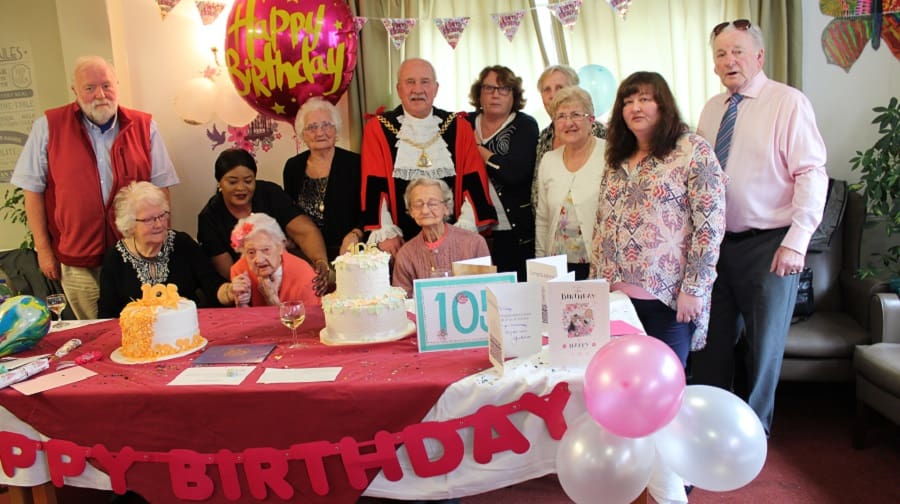 Gladys Gorringe, described by friends and family as the ‘dapper lady’, was joined by generations of her family for her 105th birthday this week, writes Amy Finch…

Ten members of her family and fellow residents of Rose Court Care Home in Rotherhithe celebrated with a party and invited the Mayor of Southwark, Councillor Charlie Smith.

The centenarian’s event was organised by care home staff, with party food served and a guitarist to sing “Happy Birthday” and other favourites like “The Bonnie Banks o’ Loch Lomond”.

“This is the third year we’ve been here for Gladys’ birthday – last year we had five generations of the family visiting,” said Shirley, her niece.

Born in Walthamstow in 1913, Gladys worked in a munitions factory in Gloucester during the Second World War. She moved to Bermondsey when she got married in 1946 and was employed in Peek Freans factory and used to bring home broken biscuits for the family, her sisters remember.

Her husband Tom Gorringe originally worked with his brother Robert at the Talbot Brothers barge builders in Rotherhithe. He then taught woodwork at a local school until his health declined.

After Tom passed away in 1975, Gladys continued living in their home in Neptune Estate on Albion Street until she moved into Rose Court Care Home seven years ago.

The couple had no children, but Gladys comes from a large family – she was one of eleven siblings.

She has three brothers still living, and her two remaining sisters Win Smith and Rose Wallace were at the party on Tuesday. Unsurprisingly Gladys is the oldest, with Win 20 years her junior.

“She always looked after the younger ones – we always called her Big Sis,” she said.

The rest of the family, who have travelled from Dorset and Reading, know Gladys as a “dapper lady”.

She continued her line dancing across the road until she was 88. Although living with dementia, Gladys is still going strong and appears happy and healthy, according to care home staff.

Shirley applauded the work of the care home staff:

“They’re really good people here. They take good care of Gladys. If I needed looking after, this would be a nice place to be.”